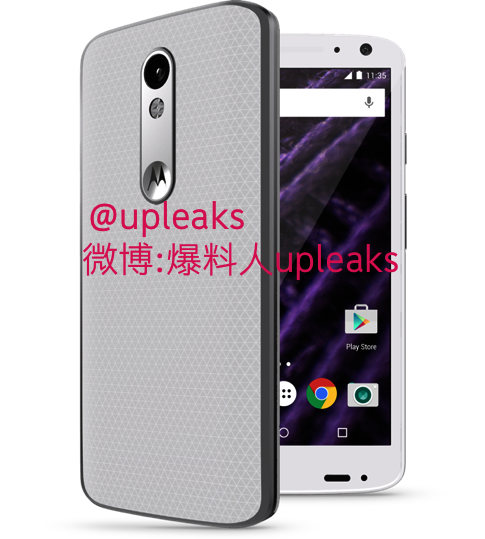 We know Motorola is planning to rebrand the Moto X Play in the US as the Motorola DROID MAXX 2 for Verizon. But other than the name, not much else about the phone’s actual hardware will change. As for the still rumored Motorola DROID Turbo 2 — also a Verizon Wireless exclusive — if last year’s model is any indication, we’re expecting the phone to receive a few hardware revisions in order to separate it from the rest of Motorola’s device portfolio and emerge as the best phone Motorola can muster up.

Now, it was a little over a week ago we told you guys about the DROID Turbo 2 coming equipped with an “unbreakable display,” but other than that unique hardware feature, we weren’t sure what Motorola had planned for the phone. Today, @upleaks is revealing new details about a phone they’re calling the the Motorola Bounce (we’re assuming the internal codename for the Turbo 2) along with a few key hardware specs on the phone and an early press render (above).

Looking at the leaked mockup, the design of the phone looks more X Play than X Style, at least on the back anyway. It’s tough to make out, but the sides are completely straight and don’t appear to taper off near the corners like on the X Style and Play (something we like cuz it should make for a more easily gripable phone). With a rumored shatterproof display, we’re wondering if these sides aren’t also some kind of thick rubber for added protection (hence the “Bounce” internal codename) but that could be a stretch.

You’ll also notice the front of the phone is showing some very interesting sensor placement, with a few along the bottom bezel where a speaker is oddly absent. That shouldn’t be too surprising, last year’s DROID Turbo only had a single front facing speaker along the top as well. But where the original DROID Turbo featured capacitive buttons on the bottom bezel, this one appears to be using on-screen keys.

We’ve reached out to our own contact and although they weren’t able to confirm the authenticity of the above render (it could be a fan render), we were told it’s spot on for the most part. While we were hoping the phone would launch in late October as the original DROID Turbo, @upleaks says the phone is looking at a December launch. Bummer. Also, whether or not there will be a GSM version of the DROID Turbo 2 for other regions remains to be seen.