At Samsung’s Galaxy S6 press event, we saw the company claim that the Galaxy S6 is 1.5X louder than the Galaxy S5. You may remember that the Galaxy S5 already had some pretty impressive audio. We cornered the two devices in a room and blared identical audio clips through them, hoping to make a determination once and for all.

Blown away. The Galaxy S6 wasn’t just louder… it was MUCH louder. Was it 1.5X louder? Although we had no mathematical way of measuring the audio levels and comparing decibels in this environment, you’ll have to trust us: even the video above doesn’t do the results justice. 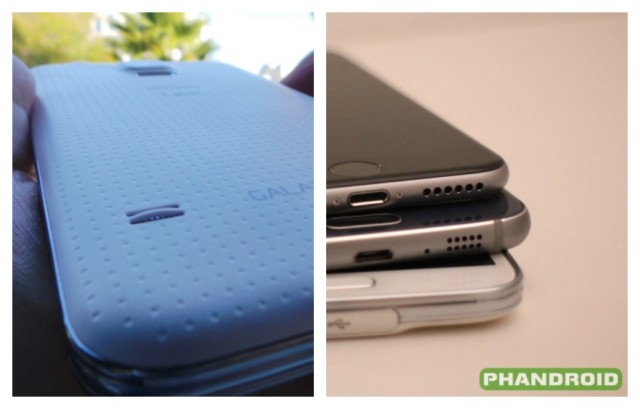 These improvements are likely due in large part to engineering, hardware, and software improvements, but it’s hard to discount the location of the speaker and size of the speaker grill. The S5 featured a tiny speaker on the rear of the device, only propped up millimeters above the resting surface with a tiny dimple on the battery cover. This allowed the sound to vibrate and escape, but clearly not as well as the Galaxy S6 where the sound proudly trumpets from the bottom of the device without hesitation.

Samsung has done an amazing job at improving the audio on the Galaxy S6- it’s head and shoulders louder without compromising any audio quality. The pitch level seems a tad higher at first listen, but we need more time with the device to make a more complete determination of the overall audio quality. From what we hear so far? We’re loving it.

If audio is one of your primary purchase points when selecting a phone, you probably know that HTC has dominated this area with the HTC One M8 (and now the HTC One M9) and the Boom Sound feature. The Galaxy S6 definitely reduces the huge advantage HTC had in this area and we’re eager to eventually get a direct comparison between the two so we can issue a more final verdict. 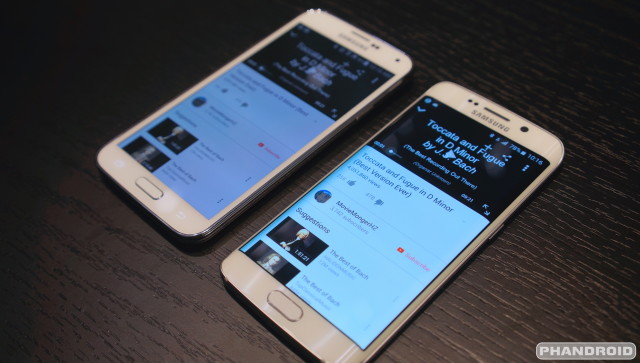 For now, the Galaxy S6 audio improvements get two loud finger whistles up.