Show Google how important this issue is by signing the petition on Change.org

The Google Play Store is becoming an absolute joke, governed by contradicting laws that are enforced without logic, and policed anonymously and at random. Once heralded as the most open and developer friendly mobile platform on the planet, Google has given Android a huge black eye by sucker-punching loyal developers right in the face. Over and over and over. 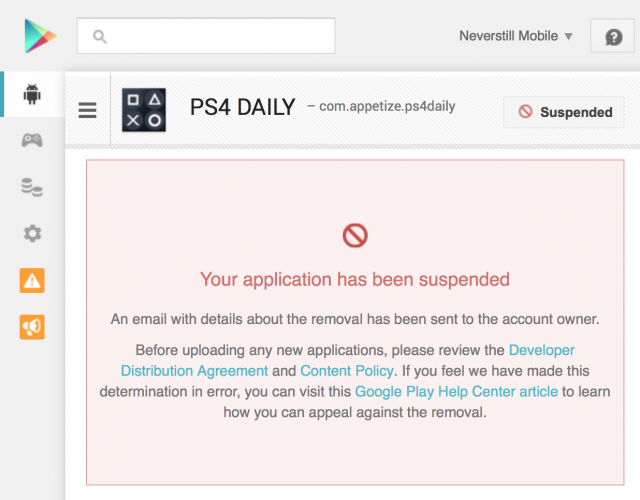 How do we know? We’re one of them. Here’s our latest frustrating and infuriating interaction with Google (it’s happened before):

Your title and/or description attempts to impersonate or leverage another popular product without permission. Please remove all such references. Do not use irrelevant, misleading, or excessive keywords in apps descriptions, titles, or metadata.

So here we are, dumbfounded. We’ve dumped a ton of time, resources, and finances into into this app over the past 2 years and Google deletes it without warning and without the information necessary to correct this app (or properly submit future apps). It’d be bad enough if Google was just doing this to us – but they’re not- Google is governing the Play Store like tyrants, randomly burning and pillaging the resources developers have built up over years, leaving behind nothing but smoldering ashes and silence.

“If I was a developer debating whether to launch first on Android, iOS, or Windows… I’d look at Google’s recent actions and think: anything but Android”

Hey, Google- you should be embarrassed. What currently seems like “Amateur Hour at the Play Store” could snowball into much more. If I was a developer debating whether to launch first on Android, iOS, or Windows… I’d look at Google’s recent actions and think: “anything but Android”. When an automated system can wipe out an entire company with no discussion or recourse, why risk it?

There is one caveat I’d like to address which may – in part – explain this suspension, but I’ll also explain why that possibility is still inexcusable and absurd. It’s possible that Google is contesting the validity of our app because it uses the name “PS4” which is a product we don’t own. Why shouldn’t this make a difference?

Our best guess is that our “App Description” contained the term “PS4” too often, but we did so for the obvious reason- we want potential users to know what they can find in the app! They allow up to 4,000 characters in the app description so why punish people for including more than one sentence defining the app? How are we supposed to describe the app without using the keyword that defines the app’s main content and purpose?

To illustrate, here is our new description for Phandroid News for Android:

Android enthusiasts will love this quick and beautiful news app which features the latest breaking news, rumors, tips, tricks, reviews, and videos for everything Android. Get the latest info about Android phones, tablets, TV, Auto, and more from the industry’s leading Android news source – Phandroid.com!

This replaces what we feel is a far more informative and helpful description, but we felt forced to do so because… well, because Google is ridiculous and doesn’t seem to care about developers in this capacity (we know all too well). Here is the old description:

Get the latest News, Reviews, and info delivered right to your phone or tablet from Phandroid, the world’s first and most respected News for Android™ source.

Tips on using the app:
☆ Press on the “Star” to save an article in your favorites
☆ When reading an article, swipe left and right to jump article to article
☆ Press the chat bubble in the lower right of articles to read comments and leave comments
☆ Pull down on any screen to refresh
☆ Latest articles in a widget, navigate through latest articles.
☆ Long press links, text, and images for additional options

For a company that prides themselves on accurate algorithms and machine learning, they’ve engineered an outrageously dumb system.

Google needs to look in the mirror and make some serious New Year’s Resolutions. Their Android developer policies are unclear. Their system of enforcing them is unfair. Their unwillingness to communicate is lazy. This doesn’t seem like the same Android that was pioneered from scratch… it seems like an Android that has gotten large and complacent. This isn’t the Android promised by the Open Handset Alliance. This is a unilateral mess in the hands of Google and they’re dropping the ball.

Please, Google, pick up the pieces… not just for us but for the sake of the entire Android community and its future.

Below you’ll find the Change.org petition requesting Google improve their practices and communication when issuing and attempting to resolve Play Store policy violations. If you believe in the fair treatment of Android Developers around the world, we invite you to sign the petition.

Android has become the most popular mobile operating system on the planet, but Google is mistreating key stakeholders that helped propel its success: developers.

Google has been improperly suspending Android Apps and Developer accounts deemed to be violating the Google Play Developer Distribution Agreement and/or the Google Play Developer Program Policies. Furthermore, Google’s notification for these violations comes in the form of vague automated e-mails that prevent honest developers from complying with Google’s demands (they’re not told what to change or fix). In many cases, apps and accounts are suspended or removed completely without prior warning or notice, offering no recourse to fix inadvertent violations regardless of the size, nature, or developer’s intentions to comply.

The result of these careless actions are often disastrous and far reaching, ranging from the exodus of loyal Android developers to the sudden loss of income source and jobs. We’ve fallen victim to this troubling practice twice at Phandroid.com which, ironically, is a site for Android enthusiasts by Android enthusiasts. After seeing countless other Android developers burned, left in the dust, and ignored by Google… we felt it was time to speak up (or move on).

This problem can be resolved by creating a team of Android Developer Advocates whose primary role is to communicate directly with developers who are issued policy violations, helping them understand the exact reasons for the violation, and help them understand what adjustments can be made to bring their app and account into good standing. Supporting developers directly will help keep good apps in the Play Store, maximize good-will and morale in the developer community, and prevent the livelihoods of developers, startups, and entrepreneurs from being destroyed.