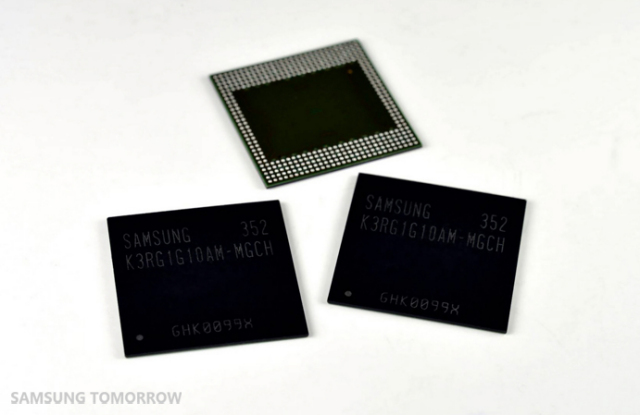 Samsung’s taken it upon themselves to get the train rolling on 20nm 4GB RAM chips for mobile devices. The South Korean company’s silicon division has announced that they are the first to begin mass producing a new LPDDR2 configuration of 8gigabit RAM in quantities of 4GB. The highest amount of RAM we typically see in consumer smartphones and tablets is 3GB, and for good reason — it hasn’t yet been practical to take advantage of much more.

But with the advent of Android 5.0 Lollipop comes the advent of 64-bit mobile computing. Many 64-bit mobile chipsets already exist to take advantage of the increased memory, though the other big part of this delicate dance — the RAM — is only just now making its way to the ballroom.

More important than RAM capacity, though, the 8gigabit bandwidth will allow devices to record video in Ultra HD resolutions, and take continuous photos in resolutions higher than 20 megapixels with no effort. Samsung says the RAM is even faster than some that you’d find in consumer computers while using substantially less power, and if that’s the case then we couldn’t be any happier as mobile devices don’t ask for much juice to do their bidding at all.

The only problem in this bit of wonderful news? Wondering how long it will take for 4GB of RAM to become standard. Most smartphones and tablets still only utilize 2GB of RAM or less, with only a select few opting to stretch to 3GB. Even Samsung’s flagship Galaxy S5 used just 2GB, though the company has made it a theme of late to put 3GB into their second high-end option, the Samsung Galaxy Note.

There could be a reason for lack of adoption, and that’s scale of production. Samsung likely spends most of its production time on 30nm 2GB configurations as that is likely in the highest demand from other OEMs.

That said, Samsung also announced that they have plans to “greatly increase” production of the 20nm RAM sets in 2015, which not only helps to meet increasing demand but could also drive the cost of the chips down. Should that happen, well, you can expect companies to put more than 2GB of RAM in a lot more phones starting at some point next year.