iPhone 6 vs Galaxy S5 (and Android) 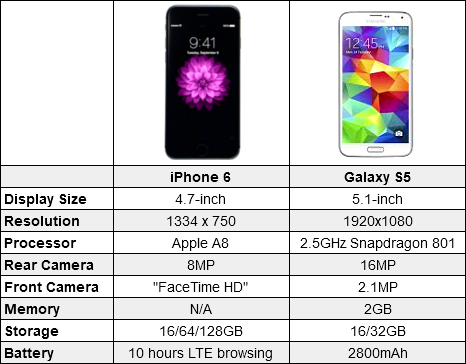 The iPhone 6 is finally here, and with it comes a hype that only Apple can produce. Regardless of what features they stole from Android, the iPhone 6 will undoubtedly be a huge success for Apple. In the Android World we also have a device that prints money for its maker: the Samsung Galaxy S5. These two devices will dominate the mobile market for the remainder of this year, and most of next. It’s time to put them up against each other to see which device reigns supreme (check below for more comparisons).

This has been a big area of focus for Apple since the iPhone 4’s “Retina Display,” and of course Samsung also takes great pride in this area. The iPhone has been slowing growing over time, but the iPhone 6 has been significantly increased in size. Apple has implemented a 4.7-inch display to finally answer the wishes of many users. Android fans will likely joke about how it took Apple so long to make the display bigger. It’s still smaller than the 5.1-inch Galaxy S5, but the competition is getting closer.

Resolution is another story. Apple now has what they call “Retina HD” displays in the new iPhone 6. It’s only 1334 x 750 compared to the 1080p display on the S5. Apple’s displays have traditional been great despite lower resolution compared to their Android counterparts. We expect the same from these new devices.

Camera is one area where numbers don’t matter so much. The Galaxy S5 has a whopping 16MP camera, but even the iPhone 5S takes better photos. With the iPhone 6 Apple is sticking with a 8MP sensor, but the sensor is all-new, and they’ve added faster focus, and “digital” image stabilization. Android devices are getting close to the iPhone (and Windows Phone devices may be better), but the iPhone is still king. Still, unless you’re a real photobuff you will be happy with the photos from the S5 and other high-end flagships.

“iOS, what do you want to be when you grow up?”
“I want to be just like Android!”

The iPhone 6 comes with Apple’s latest version of iOS. In iOS 8 they’ve added many new features, many of which have a distinct Android flavor to them. For example, the keyboard gives “QuickType” word suggestions, and you can even use 3rd-party keyboards. A feature that has been a staple of Android for years. They’ve also added “Hey Siri” command for always-listening  support, widgets in the Notification Center for 3rd-party apps, and actionable notifications. Android still has the upper hand in software functionality, the gap is closing.

We should also note that Apple has added a bunch of features called “Continuity.” These features are designed to make your iPhone work seamlessly with your MacBook. For example, you can “Handoff” webpages from Mobile Safari to you desktop, send texts and receive phone calls on your Mac, and more. Android has the capability to do this, but Google has not yet fully integrated it. This is one area where Apple is leading the way.

By far one of the biggest differences between the iPhone 6, Galaxy S5, and other Android devices is design. You can see similarities in Android skins from device to device, but iOS 8 and Android look nothing alike. Hardware is, of course, extremely different as well. The Galaxy S5 is plastic and a little cheap feeling. The iPhone is the ultimate premium device. The design of the iPhone is a status symbol to many people. Samsung is getting close to that level, but still has a long way to go.

For my money the HTC One M8 is the Android device that comes closest to Apple’s build quality. Ultimately design is up to the individual. There are some people who actually prefer the way the Galaxy S5 looks. That’s perfectly fine. The size of these devices will also play a big part in your decision. The iPhone is bigger now, but there are still plenty of much larger Android phones.

So, which phone is the best? We want to hear from you! Are you ditching Android for the iPhone 6? Are you unimpressed by Apple’s latest iPhone?