Finally. After months of tortuous waiting all has been revealed about the Moto 360, and later today you can buy one. Was the wait worth it? Back when the Moto 360 was first announced that was an easy answer. But now there is some stiffer competition in the smartwatch market, and even Apple is about to enter the game. Let’s take a look at how the 360 stacks up against the original Android Wear devices, and also some of the newer devices to enter the market. 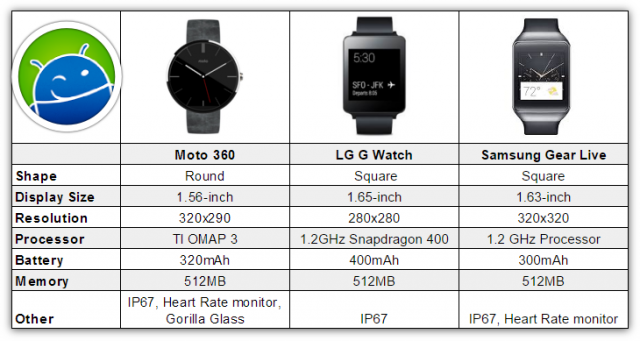 In terms of sheer display size the Moto 360 is middle of the pack. Since it has very minimal bezel it still has a smaller overall size. The 360 and Gear Live have practically the same screen resolution, but the little chin cuts off some pixels on the 360. Some people are very “anti-chin,” but without it there would be more bezel around the display. Just look at all the bezel on the G Watch and Gear Live. What would you rather have?

The LG G Watch and Gear Live all have the exact same processor. Motorola has gone back to their pals at Texas Instruments with the OMAP 3. They did not mention clock speed, but we would bet that it runs just as good, if not better, as the other devices. There aren’t many processor intensive activities for these watches to do. Performance should not be an issue with any of these devices.

The battery is slightly bigger than the Gear Live, but smaller than the G Watch. Users of the 300mAh Gear Live have reported mediocre battery life, but Motorola claims the 360 will last through the day. Unfortunately it looks like early reviews are reporting around 12 hours of battery life. Not a full day. If you’re using the 360 as much as your phone it’s not going to last very long, but you’re also probably not using it correctly either. Luckily Motorola has a very nice charging cradle.

These devices all have very similar specs, but one thing is drastically different: design. This is likely what has you so interested in the 360 to begin with. It’s not the only round smartwatch on the block anymore, but it still has much less bezel than all the others. This is what makes the 360 look so much like a real watch. If the elegant and minimal design of the 360 is your cup of tea there is no reason not to go with it.

So, which smartwatch reigns supreme? Are you still planning on getting the Moto 360 now that we know everything? Check out our second chart below with some of the more recent Android Wear devices.