LAS: Last App Switcher will change the way you multitask on Android 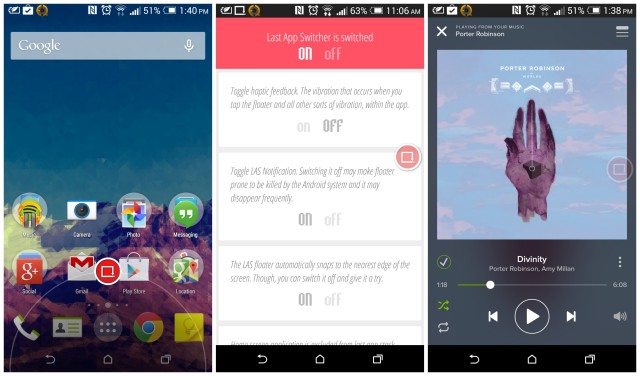 There hasn’t been too many changes in the way Android fundamentally behaves since Donut. You have a home screen, apps, and basic button setup that typically involves the frequent use of the home and back buttons. In Ice Cream Sandwich, we saw Google ditch the menu button in favor of a recent apps button, putting the focus on Android’s greatest strength: multitasking. Since then, not even Android L has done much to shake things up, sticking with the same button setup although spiffing up recent apps with a card-like interface and now including web pages from Chrome.

You see, the problem is that in most cases multitasking your way around Android using the recent apps button (providing you even have one) takes time, no matter how minimal. Pressing the multitasking app button, waiting the UI to load, selecting the app — that’s 2 taps with a lot of down time in between. This process is even more excruciating when using one of the many popular Samsung devices which don’t even have a recent apps button, requiring users to waste even more of their precious time by long pressing on that silly home button. Enter LAS: Last App Switcher.

LAS is multitasking efficiency at its finest

It wasn’t too long ago Google added the ability for users to swipe up from their virtual home buttons to quickly access Google Now. Unbeknownst by some, this can gesture can actually be configured to launch other apps (like the Camera app on HTC devices). LAS: Last App Switcher can replace Google Now, enabling users to quickly switch back and forth between their most recently used applications with the same gesture. It’s probably best described as the “Last channel” button on your TV remote. There’s no thinking involved, just swipe and you’re instantly inside the last application you had open. Swipe again, and you’re right back in the other app. It happens to quick, we were almost taken aback by the speed at which we were app switching. Also, it’s a great way to pick up chicks.

As we mentioned earlier, because not every manufacturer has included software buttons on their devices (read: Samsung), the swiping gesture may not work for you. Instead, the app can use a semi-transparent floating bubble similar to Facebook’s Chatheads. The bubble can be thrown around anywhere on the screen so it’s always out of the way, but just in reach. It’s probably not the most ideal, but it’s a great work around and leaps n’ bounds quicker than long pressing the physical home button.

It can be argued that an app like this is really that useful and that making 2 taps to access a previously opened app is hardly time consuming. But the same can be said about recent apps at all. Why not just jump back to your homescreen to access a previously used app? Better yet, why not bypass the homescreen altogether and jump back into the app drawer to find the most recently opened application? Well, the answer is simple. There is nothing wrong with any of that. And for those not bothered by it — more power to you. As for me and my Android devices, I want to streamline my efficiency by any means available and LAS does just that.

You can download LAS: Last App Switch via the Play Store link below.