Whoopi Goldberg is the Nexus 5’s unlikeliest of spokespersons, puts it to the test live on air 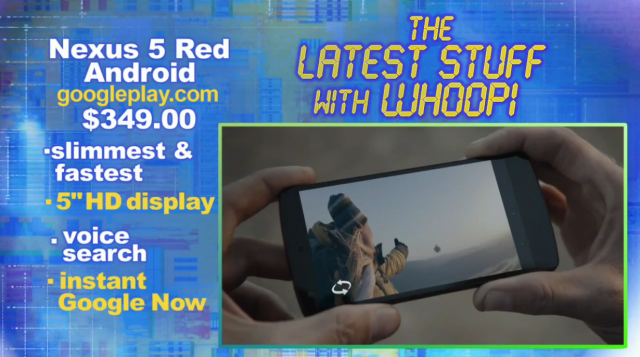 In perhaps what could be Google’s most unlikely of spokespersons, comes Sister Act star Whoopi Goldberg straight out of left field. The story actually starts late last week when Whoopi took to Twitter to announce her new found love interest: the red Nexus 5 “Google Phone.” As some pointed out, the tweet was actually sent using her iPhone but to be fair, Whoopi never said that the Nexus 5 was her new daily driver, only that she was learning the “ins & outs” of the smartphone. 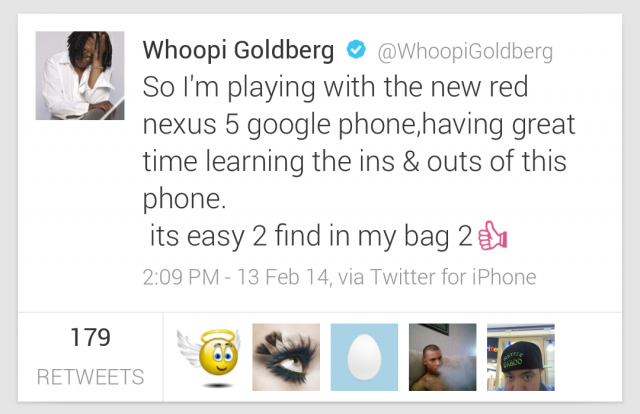 Fast forward to today where live on The View, Whoopi Goldberg showed off her favorite tech gadgets in a new segment called “The Latest Stuff.” The list was, for the most part a snoozefest, featuring everything from a phone sanitizer (what’s wrong with household Windex?), headphones, portable speaker, Polaroid camera, organizational board, and finally — drum roll, please — the newly released red Nexus 5 “powered by Android.”

Watching Goldberg talk about the phone was almost endearing (like watching your grandma talk about her iPad), but the real moment of truth came when, she put the phone’s voice commands to the test. Have to admit, I was holding my breath. But the Nexus 5 didn’t falter, perfectly answering the query, “Who is Whoopi Goldberg?” by accurately speaking back all her info to the praise of live tv audience.

We suppose the best part came when Whoopi announced that everyone in the audience would be receiving all the gadgets featured — including the red Nexus 5 — for free. Can’t say we’ve seen any Nexus 5 ads running on daytime television, so this might be the device’s 15 minutes of fame in the mainstream. Baby steps, folks.