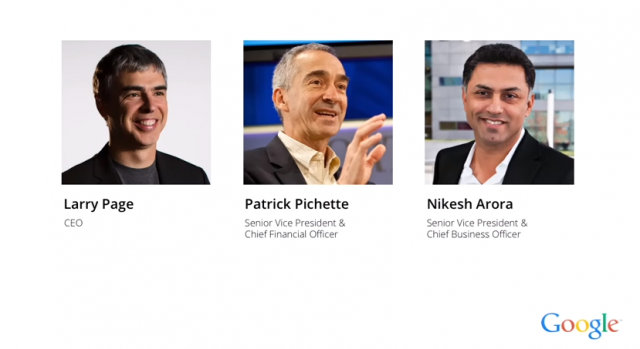 The search giant reported a cool $14.89 billion in revenue, a 12% increase from the previous year. This is actually better than expected for this quarter, a nice change after they failed to hit expected earnings in the previous 2 quarters.

Motorola continued to take a toll on Google’s bottom line, dropping $600 million to $1.18 billion when compared to 2012’s $1.78 billion. Motorola’s operating loss for Q3 hit $243 million, which grew from the $192 million the previous year. Google says they’ve done well at turning around Motorola’s product — the Moto X is the first of future Google influenced devices — now Google’s focus is on building marketing and distribution for Motorola.

They also mentioned the continued rollout unified Google Experience shops at Best Buy, where Google says they plan to offer the newest Nexus devices under their one Google branded design. Google says they’ll continue to make “advertising seamless”, which we’ll get a good taste of once they begin using Google+ users’ +1s and interests to help promote content to their friends (this can be opted out).

Looking for even more info? Hit up the source link, or listen in on the earnings call via the live YouTube stream below.