Every once in a while, an Android app is made that just completely blows our socks off. For some apps, it’s about the design. For others, it’s the functionality. For Timely, it’s both, and it’s something that could find a spot in either of resident app lover Raveesh’s weekly apps columns (Design Love and Uniquely Android).

This alarm clock blew us away from the moment we downloaded it. Timely features Holo like we’ve never, ever seen it, with lushly animated backdrops, slick scrolling elements, and more. There’s a certain “glow” to it that just makes it feel like it’s enchanted with an aura of some sort.

The developers — Bitspin — took great care in making sure this app looked great on both phones and tablets. We’re not sure how long it took for them to craft such an experience, but we’re thankful for their work all the same.

It’s an alarm clock. That’s obvious. But it does come with a suite of features which make it stand out from the rest of the pack. On the more basic side of things, you’re given all of the functionality you’d expect from an alarm clock, including multi-day alarms, smart alarm settings for gradually waking you up using a melody that fades in, and a whole suite of settings for customizing snooze times, fade-in length, and more. 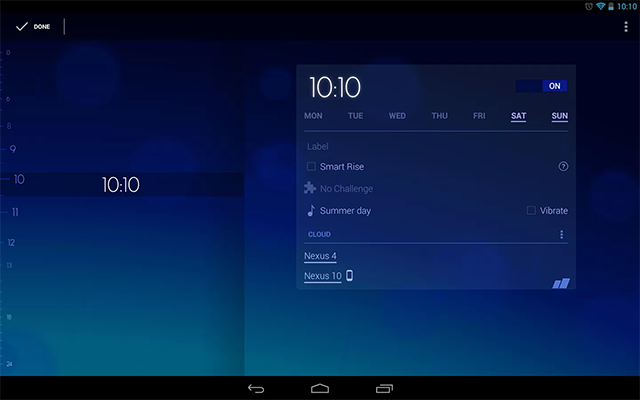 On the more advanced side, Timely allows you to create an account that will let you sync your alarms across all devices. Not only will this give you the same set of alarms on each of your devices without having to set them up individually, but you can silence all alarms from just one of the devices if you so choose.

Timely features a host of puzzle challenges you can enable that will ask you to complete the challenges before allowing the alarm to silence itself. It’s a great feature for those who have trouble waking up and instead prefer to hit the snooze button until their eyes decide the want to staty open.

The folks at Bitspin will look to make money through premium add-ons, including extra alarm tones, themes, puzzles and more. You can buy these elements separately or get all of them in one go for a low flat rate for an in-app purchase.

The app features a very nice collection of sounds to wake up to, so you will definitely want to consider throwing a dollar or two their way to get some of them. (Note that you can preview each theme and sound before deciding whether or not you want them.)

And if spending money isn’t your thing, you can earn Share points to go toward unlocking stuff instead. You gain these points simply by sharing the app with your friends and family through Android’s built-in share feature. All of these themes and sounds can be used for free for the first five days, after which you’ll be asked to pay (and presented with some pesky ads for those who don’t opt to unlock the full premium version).

That we are making such a big deal over an alarm clock is proof positive that Timely truly is an app in a league of its own. Give it a try in the Google Play Store, and be sure to watch Chris go hands-on with it in the video above.

more_vertHow to send Google Maps directions to your An

closeHow to send Google Maps directions to your Android phone

Say you’re browsing the web and are looking for directions, how do you send it to your phone so that you can pick up where you left off? Here’s how.