Joysticked: Shadowgun on the Moga Pro

DISCLAIMER: This new series is in no way sponsored by Moga. I happened to use the controller at the Google I/O sandbox for the multiplayer game demos, and instantly fell in love with it. In my eyes, the Moga Pro is the best thing to have happened to mobile gaming since Snake, and the aim of this series is to encourage more game developers to include support for such controllers.

I typically do not write about games, simply because I’m not a big mobile gaming fan. The casual ones are far too underwhelming for me, while the on-screen controls pretty much always result in me being dead in action games before I’ve even spotted the enemy. In fact, Shadowgun (which some of our older readers may remember I named as one of my favorites back when I joined) might just be the only title I have completed ever.

Everything changed after about a minute with the Moga. I knew I HAD to have one, and placed my order on Amazon almost immediately. Setting up the Moga, at least on my HTC One X, is pretty straightforward. Switch on the controller to the ‘A’ position, switch on Bluetooth on your device, and launch the Moga pivot app. From there, the app will pair the controller for you and then connect to it. As you would expect, Moga’s app lists several games that support the controller, and have a separate tab from where you can launch games that you have installed.

I decided to go with Shadowgun first since I wanted to see how the experience would be with a third person shooter. Upon launch, you need to open up the setup page and configure the keypad as per your requirements. The text here isn’t perfectly sized, with my guess being that the font size has been set using absolute pixels instead of density independent ones. A bit of squinting is going to be necessary.

Once everything was set, I started a new game all pumped up, thinking that I’m about to completely whoop the AI’s ass. Within a few minutes, I was put in my place. You see, having not played a serious game in a long, long time (the last I can remember is Counter Strike at LAN parties in my college in 2009), I just wasn’t used to control with such precision. I would often stop in my tracks to shoot the humanoids, keep getting hit by those creepy exploding spider-like robots, and was no match for those little flying drones. And don’t even ask me about how I fared against the lobster-shaped enemy boss.

However, I stuck at it, and was soon improving. I started getting used to the gamepad layout and was beginning to perform multiple actions at the same time. A great example of what is possible with the Moga is the stage against the Driller. For those who haven’t played Shadowgun, this stage essentially sees you running away from a huge drilling vehicle that wants to run over you inside a tunnel, while at the same time requiring you to turn about a bit and hit four targets on the way that would help destroy the machine. This means you are often running straight, then turning about and shooting at those targets while running backwards, and then turning around again. Also, there are a bunch of obstacles in the path.

Without the controller, this stage had taken me forever. Needing to perform three actions at once with on-screen controls can be extremely difficult. It wasn’t a piece of cake with the Moga, either, but I got it done much, much quicker. I also could see the progress I had made in getting accustomed to the controller. Once I had that level done, I felt like Keanu Reeves in The Matrix saying to Morpheus “I know Kung Fu”. Except it took me much longer.

So, I have a few suggestions with my conclusion: the first is that if you were on the fence regarding the Moga, my suggestion would be to buy it. This is what serious mobile gaming needed for a long time. With those $50, and maybe some HDMI-output or something, you essentially have turned your device into a pretty good console that you can carry around with you. In fact, it got me through a ton of my 24-hour flight back to India from San Francisco. They will be demoing a variant with an in-built battery pack for your device at E3, which you might want to wait for.

The second suggestion is that if you own a Moga, get Shadowgun now. The last would be for those who don’t own a Moga, and have never played Shadowgun: get the game now, if not both! 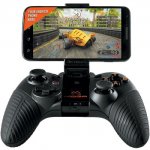