SmartBot uses your smartphone to power a simple robot

I must admit that simple robotics is not something I am terribly enthusiastic about, but the SmartBot has succeeded in catching my eye. It’s a small robot that uses your smartphone as its brains, eyes, and ears to do its bidding. You cradle your smartphone inside its dock-like cradle, and the companion app produces a cheery-looking face to give the combo a bit of personality.

SmartBot is equipped with many different ports for accessories and extensions, and for compatibility with those powering the unit using an Arduino development board instead of a phone. The expansion port, for instance, can be used to add things like motors, buzzers, electromagnets and more. Current accessories include a gripping claw, a trunk, an adapter for LEGO brick pieces, a pen adapter, a ball gun and a lot more. SmartBot is also equipped with NFC so you could put together a pretty nice in-home automation setup.

The graphic below shows the many different sensors and hardware the SmartBot will take advantage of while your smartphone is in play, including the use of GPS, front and rear cameras, and more. Anything your smartphone can do, the SmartBot can use. The folks at Overdrive Robotics will make it easy to develop unique apps and games for the thing with an expansive SDK for developers to sink their teeth into. 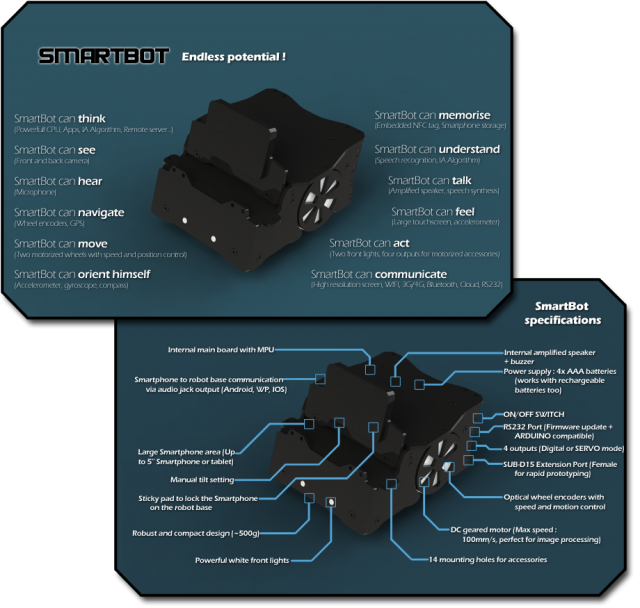 This little guy would be good for learning, fun, entertainment, and a lot more according to the folks at Overdrive. It looks interesting, but you’re probably wondering how you can get one for yourself. It’s not available just yet, but they’ll begin shipping in April 2013, and it’ll cost you just €160,00 including tax. Get more info here, and pre-order one for yourself if it looks like something you’d be interested in.

PS: this list gives you a quick look at the devices that have been tested with SmartBot so far. Other devices might work just fine, but they aren’t guaranteed to be fully compatible. It’s quite slim so keep that in mind before putting your money onto the table.