Our friends at Fuhu, a company that is specializing in tablets for the youngsters of the world, told us to expect its latest Nabi tablets to release around this time, and it seems the company is about to make nice on its promise. The two latest devices — the Nabi Jr and the bigger Nabi XD (the former is for the toddler-type, while the latter is meant for older kids) — seem to be getting readied over at Best Buy’s neck of the woods for an eventual release.

The two tablets have made an appearance at the big box retailer’s website, though getting it in-store or via shipping seems to be impossible right this moment. We have feeling that will change soon, but without an official press release to confirm we won’t be able to gauge how close we are to it being shipped. 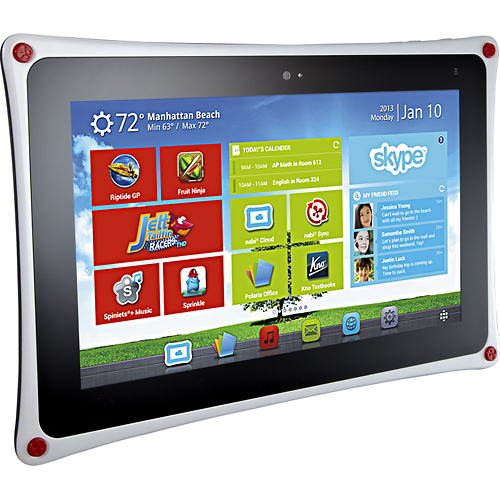 Nabi Jr is a $100 Android tablet with a 5-inch WVGA display, a Tegra 2 processor, 4GB of internal storage, a 2 megapixel swiveling webcam and a heavily customized version of Android 4.0. This version caters to those just old enough to start learning, but not too old for what could pass as a play toy. It’s been built to withstand the beating that a small child can unexpectedly deliver, so don’t get too worried if you think it won’t hold up to the forces of your young ones.

On the other hand, the $250 Nabi XD brings a 10.1 inch 720p device with 16Gb of internal storage, A customized version of Android 4.1 Jelly Bean, a 2 megapixel webcam, 1GB of RAM and an NVIDIA Tegra 3 processor. This particular device is for children who are starting to know too much for their own good, and will need a tablet to fill their brains with all the information they seek.

Both tablets feature parent-friendly software that’ll aim to keep your kids’ eyes off the bad stuff you often find around the internet, as well as educational games and apps. We’ll be keeping our eyes on the Best Buy pages to make sure we don’t miss when they begin shipping, and we’ll update this post as soon as that occurs.