The Kyocera Torque only hit the FCC exactly two weeks ago, and it’s already gotten some official announcement love by Sprint. The Now Network has officially announced forthcoming availability for the rugged Android 4.0 smartphone. The device’s most notable claim to fame is its military spec engineering, with the standard dust, water and shock proof features that should make any field-working man happy.

The device can be submerged in water for up to 30 minutes, withstand extreme temperatures for up to a few hours at a time, endure typical drops, eat dust for up to 6 hours, and more obscure conditions such as solar radiation exposure, low pressure, high humidity and salt fog. In other words, you’re free to go absolutely nuts with this device without a worry in the world. 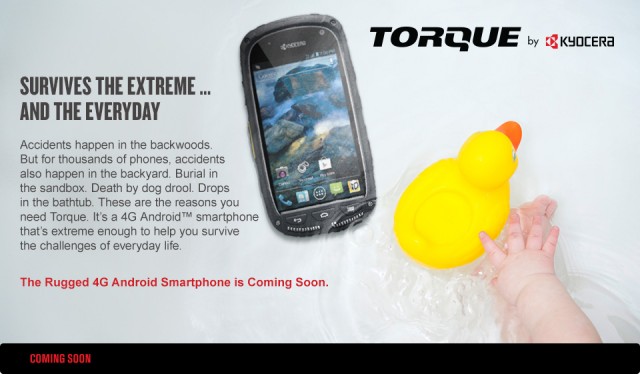 Of course, such ruggedness doesn’t come without the typical price tag of “ugly.” The device doesn’t have the boyish good looks and attractive curves of today’s typical smartphones, but that’s a decent trade-off for durability. For what it’s worth the device looks better than your average rugged smartphone so there shouldn’t be any worries there.

The Kyocera Torque also features the proprietary Smart Sonic Receiver Technology, a ceramic-based bone-conduction sound technology that will eliminate the need for a traditional speaker and send sounds to the user’s eardrum using vibrations. The feature is sure to be a lifesaver for those who work in noisy fields like construction as sound won’t be drowned out by your mechanical surroundings.

It’s quite the remarkable phone for what it is, and those of you who need a phone like this are probably wondering when, exactly, you can get it. Unfortunately we don’t have those details yet, but it wouldn’t be unwise to set your expectations to “sometime in February.” Read on for full press details. 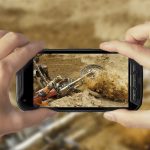 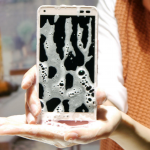 This new washable phone is perfect for germaphobes 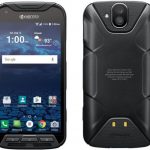 Kyocera’s DuraForce Pro can double as a 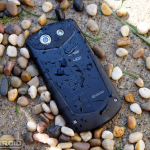