In today’s earnings call, Google’s head honcho Larry Page fielded questions from select investors and members of the press. Most of that mumbo jumbo is boring numbers drivel that we don’t have much care for, but Google’s CEO did find an opportunity to address the recent issues Google has had with providing optimal supply to meet overwhelming demand of the latest Nexus devices.

Page didn’t get into many specifics, but he told us that fixing the Nexus supply line — namely for the elusive Nexus 4 and Nexus 10 — was an absolute priority for the team responsible for Nexus devices. We’re not sure how much Google can do on its side to help Samsung and LG pump out enough devices at a rate rapid enough to meet with growing demand.

Google has already improved its customer service and communication throughout this ordeal. Shipping patterns, while still erratic, seem to be a lot more sensible and the rate at which paying customers are getting their devices seems to have stabilized. The only problem is getting enough supply to start taking new orders, a frustrating situation for those who wouldn’t mind having a beast of a device for just a few hundred dollars. 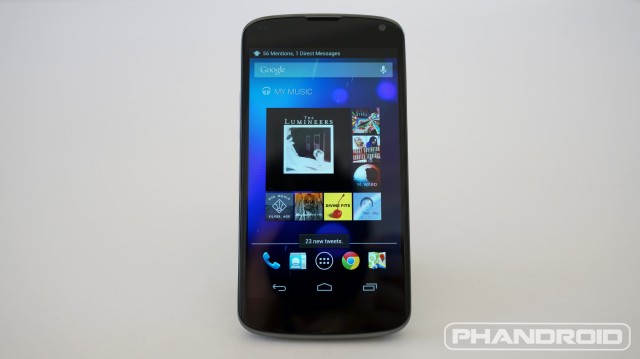 Such a scarcity typically doesn’t last much longer than a few months, but the truth of the matter is that Google doesn’t seem to be comfortable giving us a solid outlook on production estimates, and neither does any of its hardware partners. Most companies have no problem revealing  optimistic feelings about supply whenever things are looking up, so the fact that nothing optimistic or certain has come from any of these guys yet is a bit troubling.

The Nexus 10’s availability has been a lot less frustrating to deal with as it has seen both longer on-sale periods and shorter out-of-stock periods. The Nexus 4, on the other hand, spends weeks at a time on backordered and out-of-stock status, and any miraculous surge of supply lasts less than an hour.

Many are starting to lose interest as a number of folks right here on Phandroid and over at AndroidForums.com express their readiness to give up and look forward to new devices. Nothing beats a Nexus device for some people, but if you can’t get your hands on one then it becomes increasingly hard to stay excited about it.

With rumors of Motorola’s “X” Phone getting stronger and Google I/O quickly approaching we wouldn’t be surprised to see people hold out even after the supply chain has stabilized. We’re not saying that whatever is on the horizon is sure to be a lot better, but for some it’s worth waiting just to find out.