It’s hard to believe that there are still phones that ship without LED flashes in this day and age, but you’d be surprised how many phones there are without this seemingly basic addition. In fact, the original phone that started the current Samsung craze — the Samsung Galaxy S — was one such device. An interesting solution has been thought up to take care of that oversight, though, and it exists as a project on IndieGoGo.

It’s being called Coverlight, and the engineer — Stefano Emidi — has done an excellent job constructing this one. It’s a battery door replacement that has a built-in LED flash. It’s been carefully built to steer clear or blocking other elements like the camera (of course) and speaker, and also does well to steer clear of causing any issues with radios.

The door includes a button to turn the flash on and off. It obviously won’t be able to provide a quick flash as it doesn’t interface with the Galaxy S’s hardware or software in any capacity, but it’s a lot better than not having the option at all when you need to take those tough pictures in the dark.

The only problem with Coverlight is that it has only been built for this specific device. The idea is noble, but at this point the Samsung Galaxy S has lived out the typical two-year lifespan that devices tend to have thanks to the nature of mobile contracts. There are sure to be a few strays here and there, but the device has been antiquated for the most part. This means Coverlight is going to have a tough time raising the funds it needs to get off the ground.

A better idea might be to provide a line of cases for a multitude of devices with this functionality built-in. Still, the problem with that is most popular devices these days already come with LED flashes built-in. If nothing else, though, Coverlight serves as a great reminder that the most simple ideas can perhaps turn out to be the most useful, and perhaps this hardware mod can inspire more people to solve the problems OEMs force us to solve with glaring omissions.

We’ve contacted Stefano to get his thoughts on how he could take this project further, but if you happen to own a Galaxy S and find yourself needing something like this be sure to pledge some funds to the project on IndieGogo. It’s already racked up a modest $700+ so there’s some interest there, but only time will tell if this ends up becoming something that members of the crowd-funding community find themselves wanting in droves. 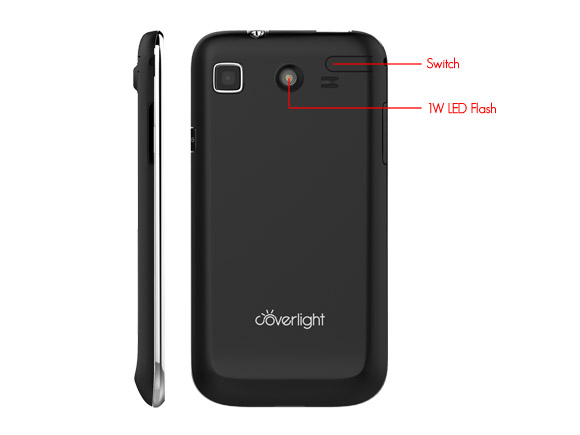