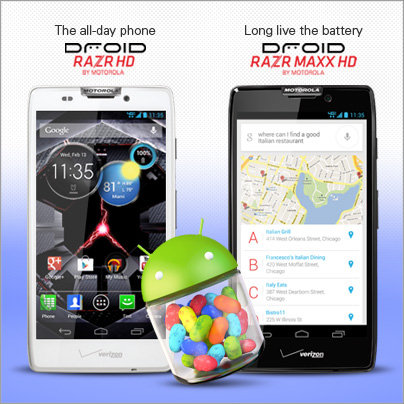 A couple more Android devices have been added to the Jelly Bean family today, thankfully. Motorola has officially announced the beginning of the roll-out process for its latest Verizon Wireless phones, the Motorola DROID RAZR HD and Motorola DROID RAZR MAXX HD.

The devices originally launched with Ice Cream Sandwich, but Motorola promised everyone that getting Android updates out faster would be a primary concern going forward and that promise is certainly being lived up to.

The roll-out will happen in multiple phases, as you’d imagine, so don’t fret too much when you go to check for the upgrade in the notifications menu.

It might be a week or two, or maybe even three, before your phone gets the upgrade so it’s best to suspend your anxiety and just let it come to you. Other methods of getting the upgrade may eventually pop up, though, so if you can’t wait and Motorola isn’t pushing it to you as fast as you’d like you can always check out AndroidForums.com to see what your options are.

Motorola’s user interface got a bit de-bloated following Google’s purchase of the OEM. Whether or not that was a direct result of the acquisition is another story for another day, but should you read Motorola’s upgrade page you’ll find that its Jelly Bean highlights read more like a Nexus phone than it does a MOTOBLUR phone these days.

That’s a great sign of things to come, and we’re sure those of you owning these particular devices couldn’t be any more happy. Google Now, on-board speech-to-text, expanded notifications, improved Android Beam and more are all being touted as the main features this update brings so Motorola’s letting its own customization take a backseat to allow the more vanilla features of Jelly Bean to shine. Be sure to head to its site for more information.