Loving gadgets can be an expensive hobby. While everyone might want a smartphone, a tablet, and a laptop, not everyone can afford all three. And if you’re going to buy all 3, why settle for anything but a seamless experience? The ASUS Padfone is my clear favorite for the best gadget of MWC 2012. It’s a fantastic concept that will save consumers money, offer greater seamlessness between devices, and the concept is executed beautifully.

Regardless of whether you’re using the phone, the tablet, or the laptop, it’s the guts of the phone (Qualcomm MSM8260A Snapdragon S4 Krait dual-core 1.5GHz processor) that powers everything. However, each of the three components – the phone, tablet, and keyboard – all have their own battery. This makes perfect sense considering how quickly a tablet or laptop would drain the tiny battery of a smartphone, but the setup provides an added benefit: the tablet (6600 mAh battery) will power both the keyboard (unknown mAh) and phone (1520 mAh battery) when connected. Essentially, you’re tablet is also a backup battery source! 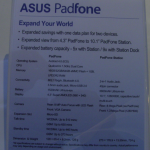 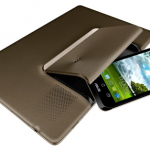 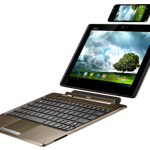 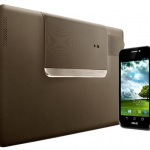 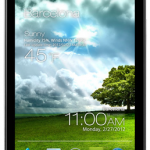 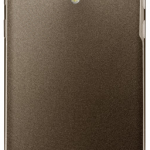 The PadFone runs Android 4.0 which is a blessing right off the bat. There appears to be some slight customizations, but nothing too offensive to the stock Android lover (this could change as individual carriers will surely dictate case-by-case). Pop your phone into the tablet and you’re running ICS on the tablet. Connect the keyboard and you’re suddenly trackpadding, clicking, and typing rather flawlessly. It’s always nice to have your devices sync… but when your one device IS three devices, no syncing necessary; you’ve already got everything you need.

The Padfone screen is 4.3-inches with 960 x 540 Pixel resolution and made of Gorilla Glass. It looks great. The whole phone is only 9.2mm thick, and while I was concerned with ASUS ability to produce a high-end PHONE, my fears were quickly quashed when I first held the PadFone in my hand. It looks great and feels great.

The Padfone Station has a 10.1-inch screen with 1280 by 800 pixel resolution and is also made of Corning’s Gorilla Glass. I was incredibly impressed with the Padfone’s slim, light, but great feeling phone, but disappointed by the weight of the tablet portion. While docked in the keyboard the weight makes no difference, but if you’re only using the Padfone Station as a tablet it seems a bit cumbersome and heavy. I’ve seen one spec sheet read the station is 716g and another read 724g, neither indicate if that includes the keyboard dock or not. We’ll try to get more info on this and report back, but holding the tablet definitely feels on the heavy side. For comparison sake, the Motorola XOOM is between 708g and 730g depending on the model.

Speaking of spec sheets, take a look at the one we snapped from the demo stand: 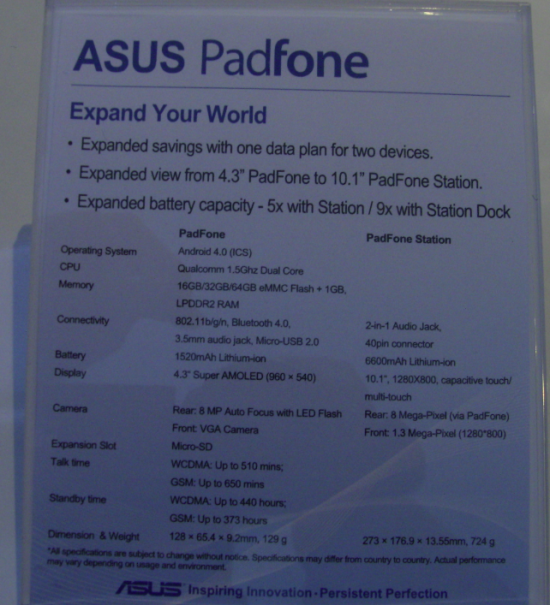 One common question is sure to be, “can I use my phone for voice calls when it’s plugged into the tablet/laptop?” You sure can, and that’s one of the more unique features on an already unique device.

The Padfone Station comes with a stylus. That stylus has an on/off button along with volume up/down, an earpiece and a microphone. Answer your call and/or make your call, turn the stylus on and hold it up to your head just like it’s a regular phone. Pretty darn cool, right?

Pricing and availability of the Padfone is still completely up in the air and will depend on the region and carriers. Whether or not carriers will allow consumers to purchase only the Padfone or only the Padfone and tablet is unknown; again, this simply depends on the individual carriers and what they choose to offer. I’m hoping North American carriers jump on the Padfone but I’m nervous they’ll take a pass: they make a lot more money by selling phones, tablets, and laptops individually and trying to sell data plans to consumers for each.

ASUS is hooking consumers up with an opportunity to seamlessly converge what are normally three separate devices. The concept is tremendous in theory and seems to work wonderfully in reality as well- that’s something we’re eager to test in a full review. It’s also great to see the ingenuity and innovation of manufacturers shining in the Android World… the ASUS Padfone and Padfone Station are a prime example of what makes Android such an amazing operating system.

This is why I love Android.