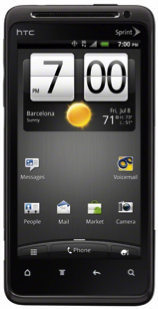 We’ve been hearing about this phone for quite some time, but Sprint has officially announced the HTC EVO Design 4G. It’s set up to be a mid-range handset but will be about as decent as any of them. You’re getting a 4 inch qHD device with Android 2.3, HTC Sense, a 1.2GHz processor, a 5 megapixel camera capable of shooting HD video, a front-facing camera, comes with an 8GB microSD card and has 4G WiMax radios inside.

It doesn’t have a keyboard like the EVO Shift did but it allows HTC to promote its thinness. At .47 inches it isn’t the thinnest device in the world but it’s still very pocketable. It’s also interesting to see that Sprint’s using qHD resolution on a 4 inch display – it’ll be nice to see how clear that turns out to be. It’ll be available October 23rd for $100 after rebates, discounts and a two-year contract agreement.Read on for full press details.

HTC EVO Design 4G goes on sale Oct. 23 for just $99.99 (excluding taxes) with a new two-year service agreement or eligible upgrade and after a $50 mail-in rebate via reward card1. It will be available in all Sprint sales channels, including Sprint Stores, Web Sales (www.sprint.com) and Telesales (1-800-SPRINT1).

“Priced at under $100, HTC EVO Design 4G is the perfect device for consumers looking for both the benefits of 4G and the latest in device style,” said Fared Adib, Sprint vice president-Product Development. “When matched with one of the Sprint Everything Data plans, our customers will unlock the value of unlimited without worrying about the cost or surprises on their monthly bill.”

Designed for customers who want to stay connected and be entertained, HTC EVO Design 4G combines the acclaimed HTC Sense™ experience with a stylish and robust feature set to make the 4G experience more accessible than ever. Other key features include:

“With HTC and Sprint working together, the smash-hit HTC EVO 4G introduced the world to the possibilities of 4G,” said Martin Fichter, vice president, product management, HTC America. “With the introduction of the fifth addition to the EVO family – HTC EVO Design 4G – HTC is expanding its diverse portfolio of 4G smartphones on Sprint’s powerful 4G network.”

HTC EVO Design 4G requires activation on one of the Sprint Everything Data plans plus a required $10 Premium Data add-on charge for smartphones. Sprint’s Everything Data plan with Any Mobile, AnytimeSM includes unlimited Web, texting and calling to and from any mobile in America while on the Sprint Network, starting at just $69.99 per month plus required $10 Premium Data add-on charge – a savings of $40 per month vs. Verizon’s comparable plan with unlimited talk, text and 2GB Web, or $10 per month vs. Verizon’s 450-minute plan with unlimited text and 2GB Web. The Mobile Hotspot option is available for an additional $29.99 per month and supports up to eight Wi-Fi enabled devices simultaneously2. (Pricing excludes taxes and surcharges.)

Sprint Nextel offers a comprehensive range of wireless and wireline communications services bringing the freedom of mobility to consumers, businesses and government users. Sprint Nextel served more than 52 million customers at the end of 2Q 2011 and is widely recognized for developing, engineering and deploying innovative technologies, including the first wireless 4G service from a national carrier in the United States; offering industry-leading mobile data services, leading prepaid brands including Virgin Mobile USA, Boost Mobile, and Assurance Wireless; instant national and international push-to-talk capabilities; and a global Tier 1 Internet backbone. Newsweek ranked Sprint No. 3 in its 2011 Green Rankings, listing it as one of the nation’s greenest companies, the highest of any telecommunications company. You can learn more and visit Sprint atwww.sprint.com or www.facebook.com/sprint and www.twitter.com/sprint.

HTC Corporation (HTC) is one of the fastest growing companies in the mobile phone industry. By putting people at the center of everything it does, HTC creates innovative devices that better serve the lives and needs of individuals. The company is listed on the Taiwan Stock Exchange under ticker 2498. For more information about HTC, please visit www.htc.com.