Could the Nexus Prime Be Compatible With a “Gutless” Tablet? 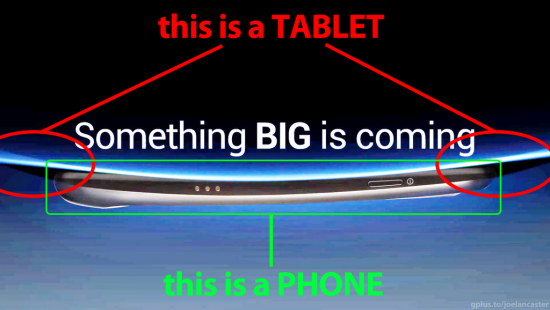 One of our readers, John Millan, sat long and hard studying the stills from the teaser Samsung posted yesterday of the device they’re announcing at CTIA October 11th – likely the Nexus Prime. His theory? That curved line above the phone isn’t just a curved line for video eye-candy.

He thinks the Nexus Prime could be compatible with a tablet dock. His theory is that the phone could attach to the back of a tablet without internals (the internals would be inside the phone) and it would be the same as any other tablet, except less expensive since you already have the phone.

I personally think that’s a bit farfetch’d, but let’s consider those dock connectors we see. Why in the world would Samsung put dock connectors on the same side of the power button? It isn’t often we see this layout on a phone. That’s plausible, but it also makes me think “what if the dock has a power button of its own?” Back to square one.

He suggests more reasons as to why this is plausible, such as the fact that Ice Cream Sandwich will combine the phone and tablet branches of Android into one package. He also says the “perfect combination” and “something big is coming” themes could be referring to the combination of phone and tablet and the size of the tablet.

What we think? We simply think “perfect combination” is ICS + some of the best hardware we’ve ever seen, while “something big” is the magnitude of this announcement and the size of the phone itself (it’ll be a 4.6 inch device).

We’re not saying it isn’t possible that this will have a tablet dock, but that’s the last of our thoughts when it comes to next week’s announcements. We’ll just have to wait and see what pans out. PS: would you even want something like this? [Joe Lancaster, Thanks for sending this in John!]