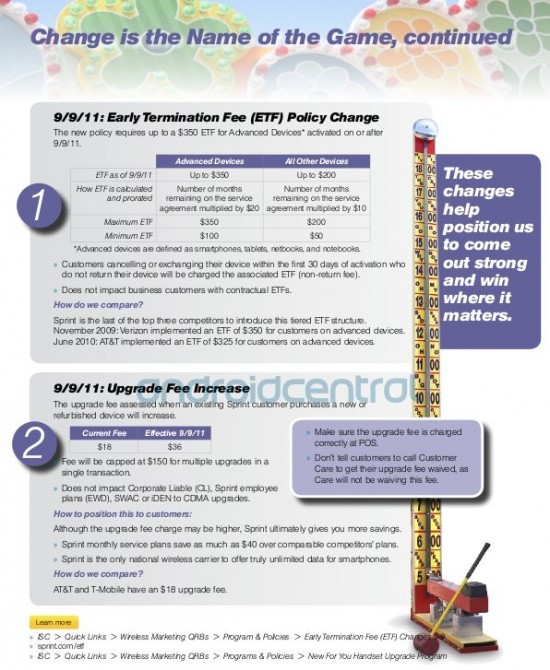 Looks like “Change is the name of the game” for Sprint moving forward and with that comes a handful of policy changes and fee increases. In an effort to keep customers from walking away onto rival carriers, Sprint is attempting to make it less attractive for those trying to get out of their contracts early. Yesterday, we reported on the rumored increase of Early Termination Fees that will only be affecting new customers starting September 9th and this latest leak confirms that. Gone is the old $200 ETF which will now be replaced by the $350 penalty for breaking your contract early. Keep in mind, Sprint will still prorate your ETF by shrinking the penalty the closer you get to the end of your term.

I don’t see a problem with Sprint trying to protect themselves when it comes to ETF’s but this new increase on their “Upgrade Fees” definitely raised my eyebrow. Effective Sept. 9th, Sprint will also be increasing their “Upgrade Fees” from $18 to $36. What’s strange is I’m pretty sure I was already being charged this here in Cali (not sure if it was different in other regions?). Upgrade fee’s are usually pretty easily waived if you buy from certain retailers, sweet talk a Sprint rep or buy your device on Sprint.com. 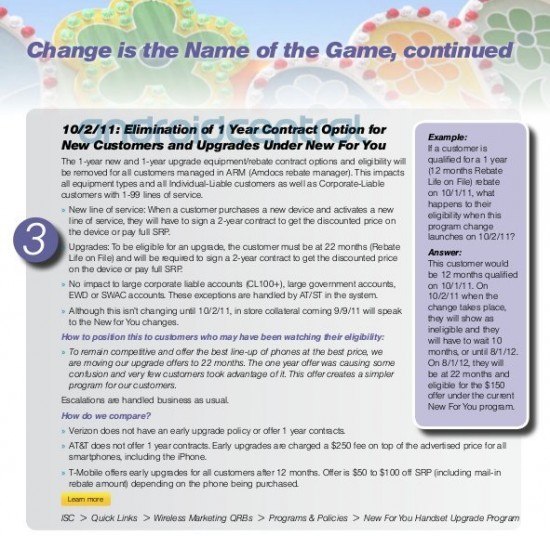 Starting October 2nd, Sprint will be eliminating their 1-year contract option from their list of plans they currently offer. I honestly didn’t even know they offered 1-year plans being a 2-year subscriber myself. Switching to this “Sprint Rewards Me PLUS” program, this is specifically for Sprint employees and doesn’t have anything to do with Sprint customers (I knew it sounded too good to be true). Bummer. Thanks, _epic! 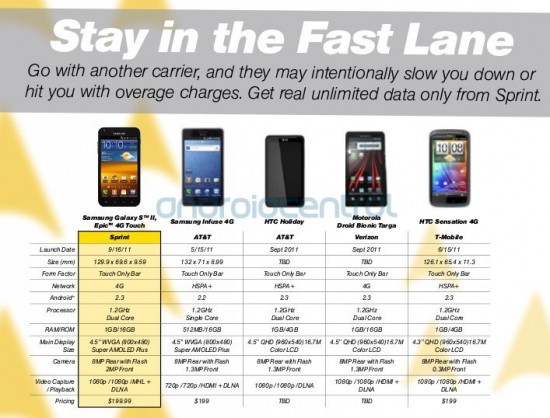 Moving on, it looks like Sprint is anticipating a September launch for the upcoming HTC Holiday (Raider). I don’t imagine they have any kind of inside info on the device and more than likely, they’ve just been keeping up to date on Phandroid with all the rumors and leaks. So, I would take this with a grain of salt. 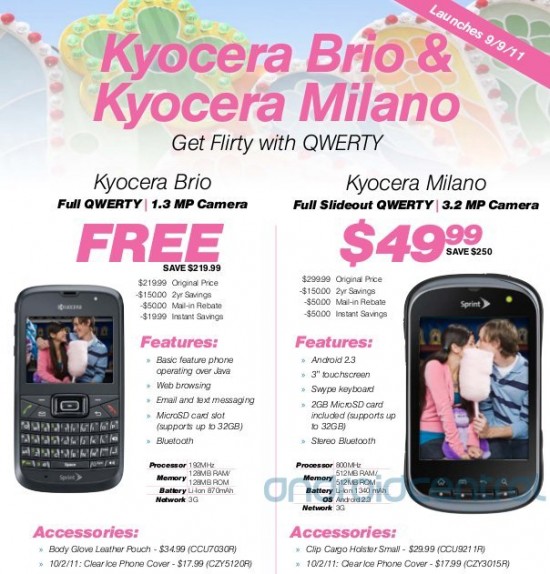 Last but not least, (okay — maybe least) is the next Android handset from Kyocera dubbed the Milano. This device will fit snugly into Sprint’s line of mid-range devices featuring a single 3-inch screen, Android 2.3, 800MHz processor, 512MB of RAM/ROM and a cheap $50 price tag.

Alright, so that just about sums it up for “the new Sprint.” We’ve seen gobs of new plans, fees and policies from just about every other carrier this year and it seems Sprint will be no different. Any of the news here make you wary about jumping onto Sprint this year? Pound for pound, I still feel like Sprint is the best option when it comes to pricing, premium handsets and service (if you have it in your area). But make no mistake — with all these new changes, I’m keeping a close eye on you, Sprint…