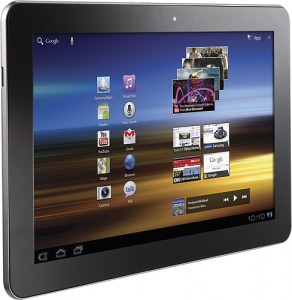 It won’t come packed with any sort of 4G (or 3G, for that matter) radio, but Sprint will begin carrying the Samsung Galaxy Tab 10.1 this Friday, June 24th, for purchase online. The 16GB version of the tablet will retail for $499, and since this is the WiFi-only version we are talking about here, there will be no pesky carrier contract to sign. The device will be available in Sprint stores a month later on July 24th. Other than its availability via Sprint, nothing changes between this version of the Tab 10.1 and the one that saw its general public release last week.

It seems odd for a carrier to offer a tablet not tied directly to their cellular network. Verizon offers the non-3G iPad bundled with a MiFi hotspot, and Sprint here also talks up their Overdrive Pro and MiFi mobile hotspots. The difference is VZW offered a price cut for purchasing the two devices together, while no mention of such a deal is made in the below press release. Less reason to be tied into a monthly bill for two years, we suppose.

Sprint customers will be able to enjoy the convenience of Samsung Galaxy TabTM 10.1 16GB Wi-Fi version beginning June 24 through direct ship sales channels, including Sprint Stores, Web sales (www.sprint.com), Telesales (1-800-SPRINT1) and Sprint Business Sales for $499.99 (excludes taxes). It will be available for purchase in Sprint retail stores on July 24.

“Samsung Galaxy Tab 10.1 expands Sprint’s tablet innovation, growing our lineup to five options,” said David Owens, Sprint vice president of product development. “This gives Sprint customers a one-stop-shop for all of their tablet needs. Galaxy Tab 10.1 is a dynamic tablet, but it is even more amazing when paired with the Sprint 4G network through our OverdriveTM Pro 3G/4G Mobile Hotspot by Sierra Wireless or MiFi(R) 3G/4G Mobile Hotspot by Novatel.”

Galaxy Tab 10.1 is designed with a brilliant 10.1-inch HD touchscreen display with WXGA 1,280×800 resolution, delivering vibrant colors and crisp clarity. The aspect ratio of the display is ideal for widescreen viewing of movies, TV shows and photos. It features two cameras – a rear-facing 3-megapixel camera with camcorder, flash and zoom, and a front-facing, 2-megapixel camera – enabling video chat.

Customized User Experience “Samsung TouchWiz UX”
Samsung’s TouchWiz user experience is designed with a Live Panel menu for customizing the home screen of Galaxy Tab 10.1 with digital pictures, favorite websites and social network feeds. In addition, the TouchWiz UX includes a “Mini Apps” tray of commonly used features, such as task manager, calendar and music player, which can be launched while other major applications are already in use.
Samsung Media Hub
The software upgrade will introduce the evolution of Samsung’s popular movie and TV content service, known as Media Hub. Media Hub has been redesigned with a new user interface for even easier downloads of rented or purchased content. The new version of Media Hub also includes an HD Extender, which allows the user to play back Media Hub content on TV through an HDMI cable from the Galaxy Tab 10.1 dock or adapter.
Readers Hub & Social Hub
It will also gain access to Samsung’s Readers Hub service, which is a robust library filled with more than 2.2 million books, 2,000 newspapers and 2,300 magazines. Also, the software upgrade will install Samsung’s Social Hub service, which aggregates email, instant messaging, contacts, calendar and social network connections into a single interface.
Versatile Content Sharing
Samsung Galaxy Tab 10.1 will also receive Samsung’s Allshare service, for seamless content transfer between the tablet and other DLNA-enabled devices, such as HDTVs, monitors and digital cameras. The software upgrade will also transform Galaxy Tab 10.1 into a device capable of accepting streaming content from a TV to the tablet itself.
Sprint was unbeaten among major wireless carriers for customer satisfaction according to results from the 2011 American Customer Satisfaction Index. In addition to tying for first place among wireless carriers, Sprint was also the most improved company in customer satisfaction, across all industries, during the last three years, according to the survey.