When is the last time you purposefully dumped water on your phone? Probably never. You’re more likely protecting it from the lightest of rain drizzles and babying it every time you place it in your pocket. But we’re not you, so we’re going to pour water on a phone:

Of the 7 phones Motorola announced on Tuesday, the Motorola DEFY for T-Mobile is one of my three favorites (along with Droid Pro for its BlackBerryishness and Flipout for it’s awkward teen attraction). These might not be high end Android’s but they are a vital part of not only Motorola’s strategy, but also the Android ecosystem, and it represents what Android is and can be.

More and more users are flocking to Android, and Motorola is thinking about those that haven’t yet switched to Android, asking themselves why not, and then catering to these users with unique offerings that fit their needs. The Motorola DEFY is clearly geared to the youthful, everyday phone user who wants the benefits of a smartphone but not all the baggage of caring for a tender piece of love and technology. 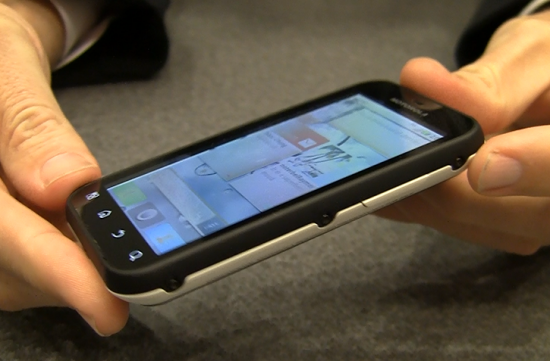 The DEFY claims to be Life Proof, which when it comes down to non-marketing speak, means you can get it a little wet, drop it and rough it up a little bit on accident and you won’t break the darn thing. It’s durable, and it comes with one of my favorite pieces of smartphone technology that I hope to see in all phones at some point – Gorilla glass.

The Motorola Droid, a phone I picked up the day it came out, was the first phone to popularize Gorilla Glass. Put it in your pocket along with keys, coins, and other goodies that would normally scratch your screen and the Gorilla Glass (for the most part) keeps your screen looking brand new. Now the body of your phone might get a little banged up, but it’s the precious screen that we care most about since it’s the keeper (and relayer) of the content that makes a phone what it is.

Talking specs, the Motorola DEFY rocks a capable but not overwhelming list:

That’s MORE than enough multimedia power to make moving from a feature phone to a smartphone well worth the money, even if you happen to splash some water on it or drop it down a flight of stairs or five. Because let’s face it, after watching the video above, at some point or another we all wish we had a phone that could defy the elements. Or our own clumsiness.