Burning the midnight oil at about 2am I saw the huge news that Motorola Android Phones would feature Bing and wrote up a lengthy article exploring what the move would mean for Google, Android and consumers. I didn’t realize it would be this bad… 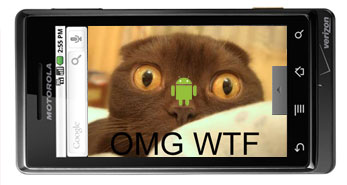 While we knew the Motorola/Microsoft partnership would be aimed at countries where Google isn’t the primary search engine or isn’t operating at all (China?) we explained the door was left open for a much more broad and sweeping integration. Motorola has just issued a Press Release essentially verifying that it WILL be much more broad and sweeping than I thought it would be even a few hours ago – just check out the first paragraph:

It’s that phrase “Global Alliance” that worries me. It’s an intentional use of the word global that clearly states it isn’t just China, it isn’t just a region – this baby could be implemented EVERYWHERE. Otherwise, why wouldn’t they just omit a geographic descriptor altogether and just explain it would be launching in China?

I’m holding out hope that this isn’t some exclusive partnership to be extended on the majority of Motorola Android Phones. If this IS the case… it would be a major coup in a continually developing story. In my original article, which goes further into depth with my concerns, I feature a poll that asks if you would prefer Google, Bing or Yahoo services on your Android Phone. I’m interested to see the results so make sure you go and vote.

Here is the entire press release:

With this collaboration, consumers will enjoy a pre-loaded Bing bookmark on their mobile browser and an enhanced search widget with Bing integration. By enabling users to customize their devices and select their own Search provider, Motorola, with help from Microsoft, is expanding the capabilities and range of services currently offered in the marketplace and opening the doors for increased personalization.

“We believe that consumer choice is one of the most critical components to ensuring a rich and seamless client experience,” said Christy Wyatt, corporate vice president of software and services, Motorola Mobile Devices. “Motorola and Microsoft have enjoyed a longstanding collaboration and the addition of Bing services to our Android-based smartphones in China is another important step in empowering our end-users.”

“Mobile devices continue to be a critical place for customers to access location-based services such as local search and mapping,” said Yusuf Mehdi, senior vice president of the Online Services Division at Microsoft. “We are pleased to expand our long-standing relationship with Motorola to bring powerful Bing location-based services to Motorola’s innovative new mobile devices, providing consumers with more choice and flexibility in mobile search.”

Search and Maps capabilities through Microsoft will initially be available in China, starting in Q1 2010, through either pre-load or over-the-air updates for devices already in market.

I can’t wait to hear what the stakeholders have to say about this one – it’s going to be awhile before the dust settles if you ask me.