Add another manufacturer to the Android bandwagon: Lumigon. The company is starting their Android initiative with an incredibly creative set of offerings with a feature we haven’t seen before on Android handsets… slide-out T9 keyboards. Typically Android phones have offered either touchscreen only or touchscreen with full QWERTY offerings so this is definitely a step in a new direction. 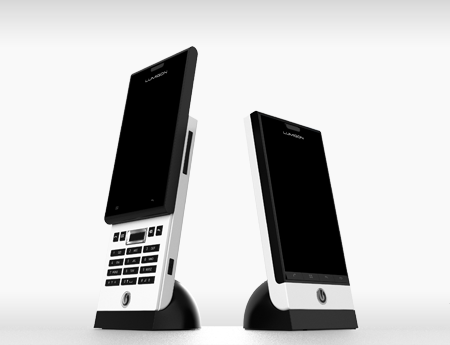 I like the move. The more the variety the better and I’m sure there are plenty of people out there – especially those transitioning from dumb phones to smartphones – who would prefer the hard T9 keyboard. Are you one of them?

As for the actual devices there are 3 of them:

Check out what their website says about the specs:

The phones are based on open standards with Google’s newest state-of-the-art operating system Android 2.1 with a special Lumigon P-GUI software implementation, to give the user even more user-friendliness.

UNIQUE SCANDINAVIAN MOBILE PHONE
RANGE LAUNCHED
BARCELONA – February 15, 2010 – After two years of top secret international development work, Lumigon Corporation from Denmark is launching the first exclusive models of their mobile phone range. The models are based on open standards and Google’s newest state-of-the-art operating system Android 2.1 with a special Lumigon P-GUI software implementation, to give the user even more user-friendliness. Moreover, the ultra-fast Freescale i.MX51 processor is
utilized, as well as a TFT screen with capacitive touch, A-GPS, 720P HDMI out, an FM receiver and an FM transmitter.

“The phones have foundation in the Scandinavian heritage of contemporary design, coupled with the finest materials such as steel, aluminum and scratch-free glass. These uniquely designed phones are furthermore packed with features not seen in mobile phones before”, states Pekka Kotiranta, VP of Sales and Marketing, Lumigon.

Some examples of the most innovative features are a universal remote control, which facilitates the usage of mobile phone as control for home appliances, and an HDMI desk station which enables the phone to be used as a source for HDTV or regular television, e.g. to see pictures or movies, or to be used as a browser device with Lumigon’s new bluetooth
keyboard.

The first model, T1, shall reach the shops early Q2 this year, and the second one, S1, will be available toward the end of Q2. The difference between the models is that T1 is an elegant touch-screen phone, whilst S1 possesses additionally an in-built T9 keypad and slider in an extremely small form factor. The key features are the same in both phones. Later this year, E1, one of the most fascinating phones ever produced, will be introduced to the market. It has a unique navigation
system and a shape never experienced in mobile phones. “E1 is the most beautiful phone I have ever seen during my entire 10 year career in mobile business”, says Lumigon’s founder Lars Gravesen.

“Interest toward the new phones has been overwhelming, pre-orders arriving from different parts of the world. The company has decided to launch the phones first in Nordic and selected European markets”, concludes Kotiranta, a VP level veteran from both Ericsson and Nokia.

Lumigon Corporation is headquartered in Copenhagen, Denmark, having R & D facilities in London and manufacturing in metropolitan Hong Kong area. It is a privately held company having vast experience in consumer electronics, mobile software and distribution. Lumigon’s mobile platform M1 and proprietary software can also be found inside the new Ulysse Nardin Chairman mobile phone.

Think we should stop calling it an “android bandwagon” and just refer to it as the “winning team”?