Marvell has a pretty extensive booth at CES and for the most part I really liked what they had going on. It’s clear that the company has a good thing going and on display they had a bunch of Android-based products they’ve worked on including the Dell Mini 3i, Entourage Edge, Alex eReader and Marvell Multimedia Tablet. It’s that last one I want to discuss a little bit more.

The Marvell representative made it very clear that Marvell wouldn’t sell this device to consumers and instead, would look for a distribution partner to slap their brand name on tablet. But after giving the device a quick test run I can’t see any company buying in (at least yet):

When you press the BACK button it activates a SEARCH and when you press the SEARCH button it sends you BACK. I asked the representative about this and he said it was intended to operate however it operates and whether it was intuitive to me or not is a different question. Mmmkay thanks.

I also had an issue with touch responsiveness as you can see several times I clearly press one icon and it highlights/selects something inches away (I press Alarm Clock and it enters API demos). When it WAS working I rather liked Marvell’s product which – in Android’s “About Phone” section – seems to be called avlight:


The annoying laughing guy? The Marvell booth had a “passport” contest/game where you stopped by to inquire about different products and could get your passport stamped. Enough stamps and you win a prize. Childishly embarrassing… I felt bad for the guy.

But I also felt bad for Marvell who put together packaging for their Marvell AVLight Multimedia Tablet that looked ready for the shelves yet they hadn’t even engineered the back and search buttons to function properly and the touchscreen sensitivity was way off. I’m guessing a firmware update could fix the button configuration oversight (how did this get THROUGH) but the touchscreen is a bigger issue.

Here is the front of the packaging: 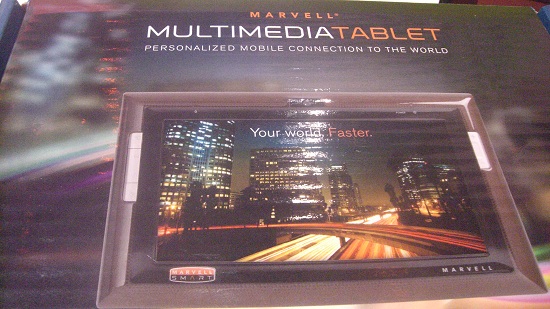 And the back of the box (click picture for larger image): 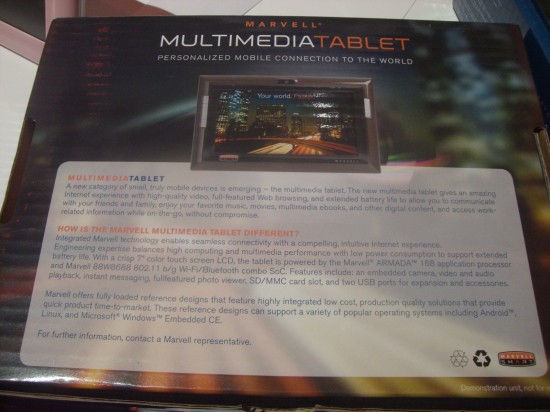 As you can see/read… just a reference design but… makes you wonder doesn’t it? Another thing I did happen to like is the picture frame stand that made it easy to work on the device sitting at a desk with one hand or on other flat surfaces. It doesn’t look half bad either: 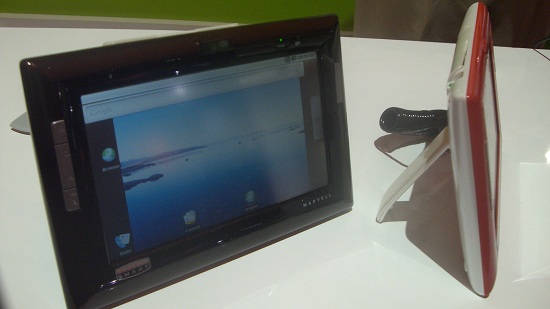 It seems like a lot of the Android-based tablets and netbooks suffer from these types of problems but with a decent number floating around out there I’m left wondering why? Are these manufacturers only half trying because the segment hasn’t made itself obvious as a profitable product category? Unless Marvell does some pretty heavy lifting I’m doubting this will see the light of day.