Depending on whether or not you want to believe two three (and counting) different members on Android Forums, the Motorola Droid is now receiving OTA updates to firmware version 2.01:

The following enhancements to the Droid by Motorola have been made:
xx OS stability is improved.
xx Battery life is improved.
xx Camera auto focus functionality is improved, and time between
shots is reduced.
xx Enhancements for three-way calling.
xx Audio for incoming calls is improved.
xx When receiving a call on call waiting, the speakerphone now
remains on.
xx Bluetooth® functionality is improved; background echo is eliminated.
xx Improved Bluetooth phone book transfer of contacts to in-vehicle
Bluetooth solutions.
xx After closing a GPS application, the GPS icon will now automatically
be removed from the notification panel.
xx Users can now receive SMS and MMS messages after an EMS
message is received.
xx SMS and MMS may now be sent to seven-digit addresses.
xx Google® contact merging has been updated to accommodate
seven-digit numbers.
xx Visual Voice Mail notices now arrive instantaneously.
• The corporate calendar widget user interface is updated.

Head on over to the Motorold Droid 2.01 OTA Update Thread to share your experiences and follow the news/reports as they happen! 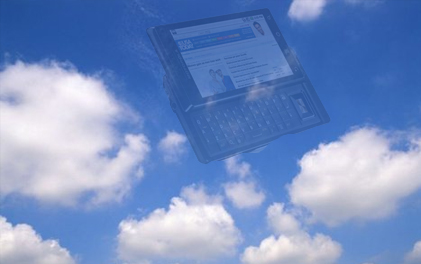 The picture is my cute lil way of saying Droid Over-The-Air. Or stupid lil way… depends how you look at it I suppose.

Update 2: A member of droidforums.net posted a picture of the new home screen: 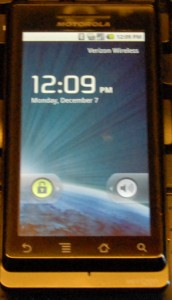 I’m unsure how I feel about that. It would be nice if if were optional.

Update 3: “Here’s what we’ve got: a clear explanation from a VZW connect that outlines how the OTA updates work for the Motorola DROID. At noon today, approximately 1,000 people received the notification to update their handset. At around midnight this evening, 9,000 more will receive it. After the initial 10,000, there is a 48-hour waiting period. No one after that receives anything until December 10th at 12AM, which will be 200,000 people. It will continue at 200,000 devices a day until everyone is updated.” –BGR