Verizon Motorola Droid Promotion Begins, It Does What iDoesn’t

The Verizon Wireless marketing department is playing this very, VERY well. Ever since the Motorola Sholes was rumored it has by FAR been the most discussed/desired Android Phone to date. There were little itty bitty leaks here and there but nothing official. Heck, Verizon and Google even announced a partnership, held up the phone to the public, but didn’t announce an actual device. And last night the company aired this commercial during the Major League Baseball playoffs:

There aren’t any questions about the target of this advertisement as Verizon puts the Apple iPhone directly in the crosshairs, bashing everything the iDoesn’t, even using their own styled music/looks:

At the end the screen lights up with “Everything iDon’t”… and the screen scruffs up and DROID DOES mysteriously finds its way to the screen. We’re left with 2 bits of semi-concrete information:

When you visit the website it is another teaser where you can sign up to receive more information: 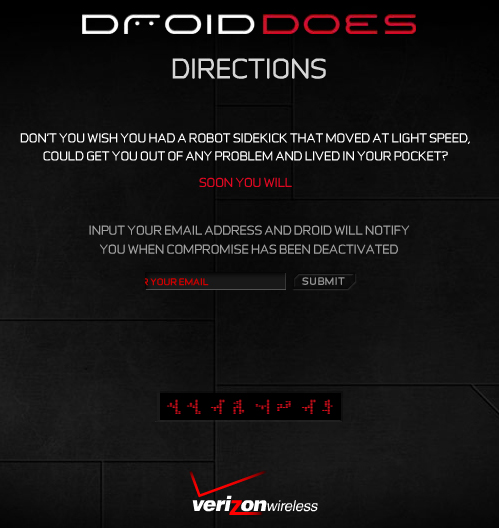 The symbols at the bottom of the page are a “coded” countdown timer which people across the web have supposedly decoded, claiming it is counting down to October 30th at midnight EST. The Email signup spits back this confirmation to your inbox: 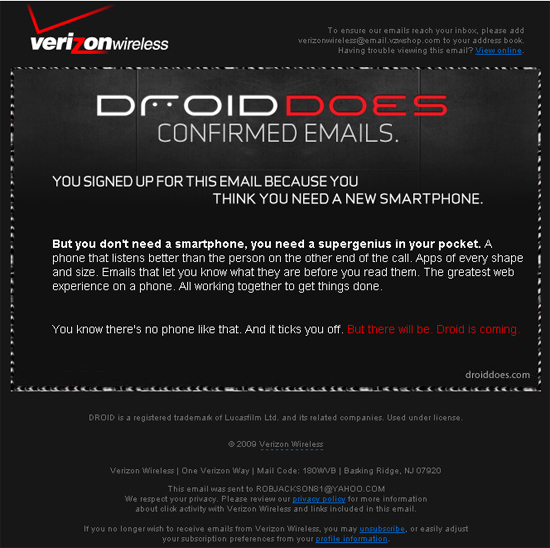 Interesting to note that “DROID is a registered trademark of Lucasfilm Ltd. and its related companies. Used under license.” Just so you know… George Lucas owns the rights to the word “Droid” – wow that’s kinda crazy.

What has also been crazy – up to now – is carriers/manufacturers taking on the iPhone head on with advertising, claiming to be an iPhone killer of sorts. Except this time it isn’t crazy at all because when it is released – if the device has no major faults and comes loaded with the rumored specs – the Motorola Droid will hands down be the best mobile phone on the market.

Amazing hardware. The best mobile network in the United States. Everything that is Android. This thing really can’t come soon enough. Verizon knows how bad we want it and they’re doing an amazing job keeping us hooked, feeding us little niblets at a time. At least now we know November is officially the month. Droid time, baby!

[Via The Interwebz, thanks to everyone who sent this in!]