The first meaningful chunk of information from the Sprint Developer Website came a few weeks ago when they used it to break the news of the Sprint HTC Hero. Now the developer portal has been filled out with a truckload of information for the developer-type. Don’t plan on going over there and enjoying yourself if you’re a consumer, but devs will have access to testing applications, provide detailed information and specs on Android devices on Sprint’s network and a bunch of developer tools to help in the creation of compelling apps. 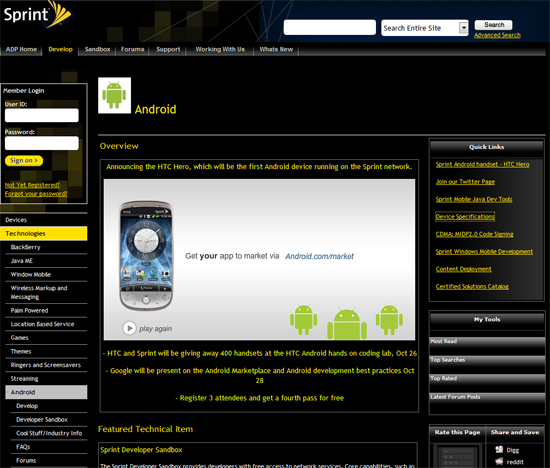 Sprint also used the opportunity to promote the Sprint Developer Conference that will be heavy on Android this year – it’s October 26th to 28th in Santa Clara, CA. You can register for the event here and keep in mind that HTC and Sprint will be giving away 400 handsets at the HTC Android hands on coding lab October 26th. I’m not sure how many people will be at the event in total… but that in and of itself could pay for the trip if you’re one of the 400.

Check out the full Press Release:

Developers utilizing the site and tools will easily be able to create and test applications for the Android platform on the Sprint network. The enhanced Web site will include information about Sprint’s Android-powered devices and will feature compelling applications that are available in Android Market(TM).

In addition, the Sprint Open Developer Conference, Oct. 26-28 in Santa Clara, Calif., will include several sessions dedicated to Android development including information from HTC and Google(TM). The event is Sprint’s ninth annual developer conference. This year marks the first year the conference is open to the entire developer community. Developers should register at http://developer.sprint.com/devcon2009.

The Sprint Developer Conference will provide compelling and useful tools that attendees can use immediately to develop applications, content, machine-to-machine devices and unified communication solutions relevant to the market. Developers will learn about current Sprint capabilities across devices, networks and platforms.

“Sprint continues to demonstrate its leadership in providing an open environment for developers to create and bring to market innovative applications for business users and consumers,” said Len Barlik, vice president of wireless and wireline services for Sprint. “With robust Android support on our application developer Web site and the upcoming launch of HTC Hero, Sprint has opened the door for developers to create Android applications that take advantage of the speed and reliability of the Now Network.”

HTC and Sprint will give developers at the Sprint Developer Conference the opportunity to be among the first to own a HTC Hero. The first 400 developers to arrive at the HTC coding lab on Oct. 26 will receive a HTC Hero with one month of Sprint service. To qualify, developers need to show their laptop with the Android development environment (1.5) installed and ready for the hands-on lab session. HTC will give away a number of additional HTC Hero devices at its booth throughout the conference. To be eligible to participate in the HTC coding lab and receive a HTC Hero, participants must register to attend the Sprint Developer Conference at http://developer.sprint.com/devcon2009.

During its evening coding lab, HTC is teaming with Mark Murphy of CommonsWare to lead an Android platform training session. Murphy has published three guides on Android development and writes the “Building ‘Droids” column for AndroidGuys and the “Android Angle” column for NetworkWorld. He has more than 25 years of application development experience and has delivered conference presentations and training sessions on a wide array of topics internationally.

Google will be a featured presenter at the Sprint Developer Conference. Android team members and technical subject matter experts from Google will lead developers in an in-depth technical discussion from 8:30 – 11 a.m. on Wednesday, Oct. 28. The day will start with an update on Android and Android Market, followed by the technical session, led by developers on the Android team at Google, which will include an introductory discussion about the Android platform, how to write Android applications and sharing best practices.

Sprint is committed to offering mobile content and applications to its customers when, where and how they want them:

* Sprint customers enjoy full HTML browsing on their phones, with Google as their search provider, experience personalized Web browsing with Sprint Web and can choose to download name-brand apps and services from the Internet – other carriers may limit applications to those sanctioned by the carrier.
* More than 300 different non-Sprint-branded devices, from machine-to-machine to telemetry, operate on the Sprint network through a widely respected device certification process.
* Sprint is a member of the Open Handset Alliance(TM), along with more than 30 other participating companies, supporting the free and open mobile applications platform named Android.

Who plans on attending?