Another application destined to become a worldwide favorite, Layar Reality Browser has finally launched and is now available on the Android Market! The video below will illustrate what exactly Layar is all about:

Essentially you’re using your phone like a camera so you can see the real world as you pan around, but the application utilizes your GPS location and G-Sensor to determine exactly what your phone/camera is pointing towards and provides you more information about it directly on your phone! But Layar introduces new layers of awesome because its technology isn’t just an application… its a platform.

Developers can utilize the Layar API to create their own augmented reality layers for use within the app! According to the company’s Press Release, more than 100 developers currently have access to the API and right now some of the available layers include Wikipedia, Twitter, Brightkite, Yelp, Trulia, Store Locators, Nearby bust stops, Mobile coupons, Mazda dealers, Tourist information and much more!

This is truly awesome! I would go into more depth explaining the service but two issues are preventing me from doing that:

So I’m off to play with Layar. Think of it as Google’s Places Directory and Sherpa had an awesome virtual reality baby that used layers from Google Sky Map. Or… yeah that’s just a lot more confusing then it needed to be. I’ll try to put together a video at some point today or tomorrow with a review but in the meantime there is a TON of information over on the Layar website so definitely check that out, and I’ve copy/pasted the Press Release below for your convenience!

AMSTERDAM, August 17th 2009. Layar, which was first launched in June 2009 in The Netherlands, announces that it’s second generation Reality Browser is now available globally on Android devices. Many new content layers are available in the Reality Browser which vary from Wikipedia, Twitter and Brightkite to local services like Yelp, Trulia, store locator’s, nearby bus stops, mobile coupons, Mazda dealers and tourist, nature and cultural guides.

Layar Reality Browser 2.0
To discover new content quickly and with ease, the new Reality Browser includes sections for ‘Featured’ and ‘Popular’. All layers are also accessible via a keyword search in the search function. Layers that are used often can be saved to ‘Favorites’. In addition to the enhanced augmented reality camera view, it is now possible to select Map or List view. For every Point of Interest (POI), several actions can be taken such as: linking to a mobile site for more information, playing a live location based trivia game, linking to a video or sound clip, clicking to call for reservations, and looking at a route description to the POI. Content partners can fully customize their layer to provide a distinctive experience for the user.

500 more developers
Over 100 developers worldwide have been given access to the Layar platform by means of an API key, and are currently developing layers.

Scott Halcomb of SystemK from Japan, who developed 22 layers including the ‘Sapporo Hotspots’ layer:
“With the Layar API and support of the developers community, creating layers has been a pleasure”.

Dave Elchoness of GoWeb3D from the USA/ India, with 11 layers published including FlickAR:
“We strongly believe that Layar represents the next evolution for mobile applications and feel privileged to participate”.

Michael Coutinho, Technical Manager at Trulia, USA:
“This is a great idea. I was able to develop our layer in about three hours.”

To further grow the community of developers, Layar has released an additional 500 new API keys. The supporting wiki (http://layar.pbworks.com), with developer instructions and documentation, are all now available.

Layar for all
Starting from today, Layar is available for everyone with an Android phone anywhere in the world.  The Reality Browser can be downloaded in all local Android Markets and is pre-installed on the new Samsung Galaxy (i7500) in the Netherlands.

Dirk Groten, CTO:
“The next platform on which Layar will be available is the iPhone 3GS. We are currently investigating other platforms that support our functionalities.”

Raimo van der Klein, CEO:
“With the release of this Reality Browser we believe we have created a worldwide platform that will bring both fun and relevant Augmented Reality experiences in one application to a growing audience of users.”

Boilerplate
The Layar Reality Browser displays real time digital information on top of reality in the camera screen of the mobile phone. While looking through the phone’s camera lens, a user can see houses for sale, popular bars and shops, tourist information of the area, play a live game, etcetera. Layar first launched on June 16th, 2009 and announced the opening up its platform by means of an API on July 8th, 2009. The Layar platform serves as an enabler for mobile location services – any database with geo-location information can easily be turned in a content layer. The Layar Reality Browser is globally available for mobile phones running the Android operating system. Layar is a company based in Amsterdam, The Netherlands. 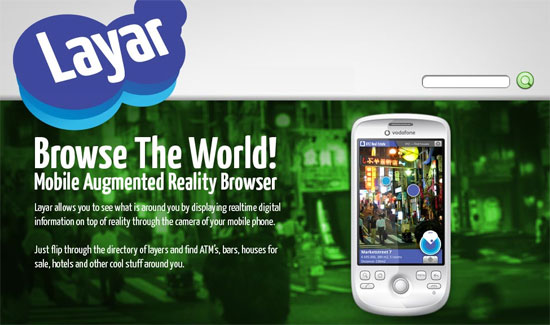