Verizon Wireless is rumored to be launching an Android Phone later this year, presumably the Motorola Morrison during the holiday season. A year ago I said Verizon would have an Android phone… and they will. All these years, Verizon has been holding back their customers from access to readily available features and capabilities in the name of profit. Now the world has the Android Market, iPhone App store, BlackBerry App World, WebOS App Catalog and a load of other piggyback app stores put out by the “me-too” companies of the world.

Verizon Wireless wants in. At some point the light bulb went off… only it went off for the wrong reason: YEARS ago Verizon could have given customers access to a whole ton of applications and features that would drastically and freely improve their mobile experience. Instead they saw dollar signs and said, “You want it? You pay for it.” Now Verizon is seeing all the money in these free/paid combo apps stores and wants in. I think the folks with the right idea are Google who essentially say, “Lets make something the user absolutely loves and then monetize it.”

Perhaps the two main business approaches above can find a happy medium… but right now the concept of a happy medium is a bit scary. On July 28th, Verizon is hosting the Verizon Developer Community Conference in San Jose, California. At that event, the company will be talking about the Joint Innovation Lab, an apparent “common software standard” so that application developers will be able to build ONE application that works across all phones that use the JIL technology.

Uhhh… sound familiar? It sounds like a few things to me:

Even with 4 potential app store competitors on its own network, Verizon Wireless CEO Lowell McAdam seems to think that the company’s App Store – which will be a joint standard with Vodafone (Europe), SoftBank (Japan) and China Mobile (China) – will be the obvious choice for developers and consumers:

“I am not here to bash anybody, but if I could write one application that could touch every iPhone customer or one billion customers, who am I going to write for?”

This direction isn’t surprising based on what we already know about Verizon Wireless… but it is concerning. It is obvious the company does not want to let go of its slipping grip of application and software distribution. In fact, it wants to regain footing and dominate. So when a Verizon Android phone launches later this year, what makes you think they’ll allow it to be as open as possible with unbridled access to Android Market?

Maybe they will. I hope they will. But another carrier launching another mobile store means more fragmentation. From a business standpoint they kind of HAVE to launch an App Store of some sort because in the end, they’re right – it has too much long-term profit potential. But their time may have passed. Lets just hope they let the game play out fairly instead of trying to handicap their own Android Phone to make their own JIL offering look superior. In the end that would only hurt themselves and their customers.

The success of Android is inevitable… please don’t delay the inevitable and launch a half-baked Android Phone, Verizon: we beg you. 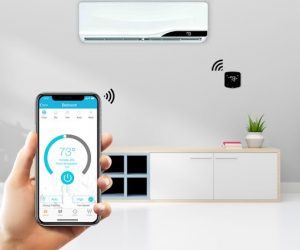 more_vertControlling Your AC from Your Android Smartph

Until a few years back, no one had imagined that your mobile phone would be used for almost anything other than simple phone calls and text messages. But in the present day, your smartphone is much more than just a regular voice-call device! It’s everything that you need in this advanced world of technology.You can …