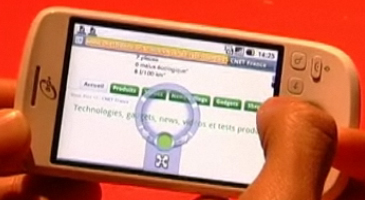 Android has a new feature that will apparently launch with the HTC Magic – a circular touchscreen wheel allowing for the smooth zooming of websites, pictures and more. The phone was examined in an interview on CNET France and you can take a peek at the Scroll Wheel Zoom at about 2:05 in the video below:

Looks pretty awesome if you ask me! I like the “double tap” to bring up zoom and I think the scroll wheel is an amazing way of getting the screen zoomed to JUST the right spot without too much effort and tapping. I’m eager for this to come to the G1.

Here is the CNET France article, translated to English:

Presented at Mobile World Congress 2009, the HTC Magic was formalized by SFR on Tuesday 10 March. This new version of the Google Phone, designed by HTC abandon this mechanical keyboard on the HTC Dream and enjoy the new version of Android: Cupcake.

This latest version of Android correct the main defects of the HTC Dream marketed by Orange. For example, it is now possible to play and record video, connect a Bluetooth headset and the lack of a mechanical keyboard to a virtual keyboard makes the Google Phone SFR more compact than the Google Phone Orange.

Unlike the iPhone, the virtual keyboard appears on the Magic portrait or landscape mode in most applications (mail and SMS for example) which gives a better comfort in the seizure.

As compared to the iPhone, menus and applications are displayed in both portrait mode than in landscape mode, again, it gains in ease of use.

Android Cupcake impressed us, it is much more successful now that Android on the HTC Dream Orange … Similarly, autonomy has been increased through the integration of a 1340 mAh battery (1150 mAh against the HTC Dream)

Magic The HTC will be marketed exclusively by SFR in late April at a price of 99 euros (with 50 euros included for the subscription SFR) and will be bundled with a microSD card to 8GB
Appointment soon for a complete test of the HTC Magic.