The ZTE Era features a Nvidia Tegra 3 quad-core processor. The Era also has a 4.3-inch qHD (960 x 540) display, 8GB of internal memory, MicroSD, HD voice, Dolby Digital audio, and will also come running and has Android 4.0 Ice Cream Sandwich. At only 7.8mm thick, it's one of the thinner smartphones on the market.

The device should arrive sometime in the second half of 2012 for Europe and China with a US release not yet revealed. 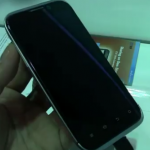 ZTE was out in full force here at Mobile World Congress to show off a couple of new devices they’ve just announced. The ZTE Era and the ZTE PF112 are the phones which we were blessed with. The former is the real star of the show despite us not being able to use its software …
See All