Aimed at the budget minded, Velocity Micro's 2011 fall lineup includes both 8 and 10-inch tablets that share a majority of the same specifications. The 10-inch Cruz T410 sports a 1GHz Cortex A8 CPU, a 16:9 capacitive display, and a front-facing camera for video calling.

Running Android 2.3, the slate won't match up head-to-head with more pricey Honeycomb tablets, but Velocity Micro still offers a high-end Android experience with the inclusion of bundled software such as the Amazon App Store and Angry Birds Rio. For a mere $299.99, the Cruz 410 is the complete package. 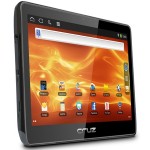 Velocity Micro has intro’d yet another Android tablet, the Cruz T410. The 10-inch slate joins the recently announced 8-inch T408 and rocks similar specs, including a 1GHz Cortex A8 CPU and Android 2.3. It also scores a front-facing camera, bundled apps including Amazon Kindle and Angry Birds Rio, and access to the Amazon App Store. …
See All