T-mobiles Pulse Mini is the big brother of  T-mobiles other Android powered handset; the T-mobile Pulse. Two main differences between models are the Mini rolls with Android 2.1 and is cheaper at £99, making it the cheapest Android phone yet!

The T-mobile Pulse mini was announced at the Mobile World Congress 2010 (MWC 2010) in February where there are a few videos shot showing the handset hands on in action. A few specs include include a 2.8-inch QVGA screen, stylus for the resistive screen, 3.2 megapixel camera, HSDPA, Wi-Fi b/g and a personalized UI which has some awesome widgets and scrolling features. The Pulse Mini also DOES include GPS, although originally it was reported to have not however this was probably due to the phone coming from a region where GPS is removed for whatever reason.

The Pulse Mini successfully launched in April in Germany and in the UK so you can grab one! At this price and specs, it really is the "most modern Android budget phone" to date.

UK and Germany Get Pulse Mini In Q2 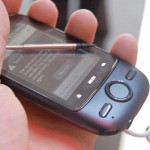 Yesterday when the T-Mobile Pulse Mini got announced and demoed, we were excited that a budget android phone would come stocked with Android 2.1. What we DIDN’T know was the price, but ElectricPig is saying the phone will cost £100 on the Pay-As-You-Go plan – a pretty sweet deal! But they also so they company …

The T-Mobile Pulse has been out for sometime now, but it appears the trend of “Mini” versions of larger devices will continue – the carrier has just announced the T-Mobile Pulse Mini. The folks at ElectricPig/FoneHome are claiming it’ll be “the most up to date budget Android phone yet” and they’re absolutely right – this …
See All