The Xperia X10 Mini Pro is exactly the same as the X10 Mini but theres one clear difference - the Pro has a full slideout QWERTY keyboard. The X10 mini and Pro are the younger and more pocketable versions of the original Xperia X10 having a smaller screen and overall size , however all the experience is still there! Like the X10 mini the Pro version features specs such a 5 megapixel camera , FM radio , capacitive 2.55" inch display and a standard 3.5mm audio jack to plug your earphones in to. It also runs Android 1.6 (Donut) and has Sony Ericsson's customizable and interactive user interface "Timescape".

Interested? The X10 Pro is expected to launch late in May on contract and is currently available to pre-order from popular online retailers ready to ship in late May also. 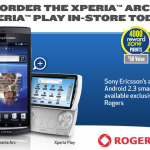 The folks at Rogers already confirmed that the Sony Ericsson Xperia Play and Xperia Arc would be coming April 28th after a very accurate rumor and now Best Buy has put the phones up for pre-sale. You can throw $50 down on each and Best Buy will hold one for you whenever they come in. … 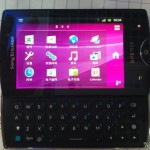 It hasn’t been too long since we got our last early peek at the upcoming sequel to the Sony Ericsson Xperia Mini Pro, but we are once again being graced with images of the upcoming QWERTY handset. The images give us a nice clear look at the phone, and from the translated Chinese forum post … 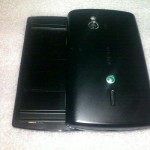 Sony Ericsson: XPERIA 10 Line Will Get No Updates Beyond 2.1

The first disappointment of the Sony Ericsson XPERIA line was that it was leaked what seemed like a decade before the company actually launched them. Product after product was leaked and launched while the XPERIA series waited in the wings for its shine.Because of the delays, it launched with less fanfare than initial buzz indicated … 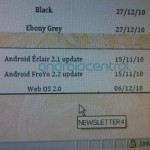 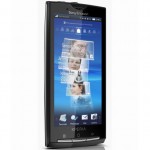 Trick or treat! Halloween is the day that you Xperia X10 owners will finally be stepped up to Android 2.1, says Sony Ericsson. After a long string of delays and more than a carved pumpkin-full of angry users, you guys will finally be able to enjoy a modern version of Android. Ericsson says that they’ll …

The long wait for Android 2.1 should soon be coming to an end for at least a small portion of Sony Ericsson Xperia X10 and X10 Mini Pro owners when T-Mobile UK pushes the update for owners of the handsets by the end of November. Through a posting to the T-Mobile UK support forums it …

Xperia X10 Phones Not Getting Eclair Until Late October

After promising an end of September window for the upgrade to Android 2.1 for their Xperia X10 phones, Sony Ericsson’s had to push it back yet again. This time, they say we shouldn’t expect to see the upgrade begin to roll out until late October as they need a few more weeks before it’s ready. …

We know the upgrade to Android 2.1 is coming for the suite of Xperia phones Sony Ericsson’s got out and about right now – and we know it should be headed our way before the jingle bells start ringing – but what about anything beyond that? According to a leaked roadmap for the X10 and …
See All