The Samsung Galaxy Tab is the first high end tablet released with the Android operating system. It has a 7 inch capacitive touchscreen, 1Ghz processor, and Android 2.2 with the Samsung TouchWiz UI.

Being the first real competitor to the iPad, the Galaxy Tab has fell to a lot of scrutiny, but has been a very popular device since it's release. Also, being released on all 4 of the major US carriers has definitely helped this tablet become a force to be contended with. 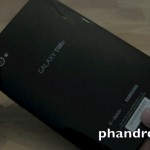 Let’s just get it out of the way: the Samsung Galaxy Tab is the first Android tablet worth anyone’s money. It really is, but whether or not you should spend the money on it is the real question. With a 7-inch screen, 1GHz Hummingbird processor, front and rear cameras, the Galaxy Tab promises a lot, … 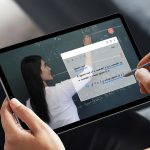 It seems that Samsung is looking to revamp one of its older devices, according to a leaked specs sheet. 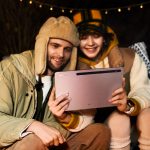 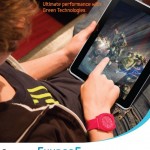 Unlike most Android manufacturers, Samsung seems intent on retaining its strategy to manufacture hundreds of variants of devices that vary in the tiniest of manners. After creating something like a gazillion tabets in the 7-to-9 inch range, they seem to be interested in testing the upper limit on tablet sizes if the rumors of the … 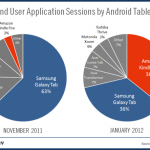 There’s a new sheriff in town according to Flurry, an analytics company tracking tens of thousands of Android applications. After crunching the numbers on Android tablet usage the firm found that the Amazon Kindle Fire has quickly closed the gap with the Samsung Galaxy Tab. In November, the Galaxy Tab (no specific model is named) … 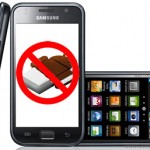 Rumor: Galaxy S, Tab to Get “Value Pack” Instead of ICS

Just yesterday Samsung gave us a glimmer of hope that their 2010 flagship devices – the Galaxy S and Galaxy Tab – could get Ice Cream Sandwich as they went back to reevaluate the feasibility of the task. With TouchWiz in the way, it certainly won’t seem as easy as we’d hope considering these devices … 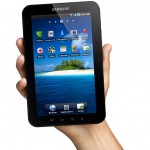 Samsung Evaluating Feasibility of Getting Android 4.0 on the Galaxy S, Tab

The folks at Samsung first denied original Galaxy Tab and Galaxy S users a taste of Ice Cream Sandwich and, as you might imagine, it created quite the uproar. It couldn’t be a hardware performance issue due to the Nexus S getting Ice Cream Sandwich with near identical performance hardware. No, it was a space … 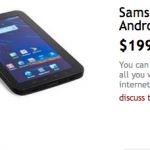 woot, focused on providing great daily deals, is clearing house on stock of the original Samsung Galaxy Tab. As the Galaxy Tab 7.0 Plus moves on to shelves to take its place, you can snatch up last year’s model for an easy $199.99 (plus $5 shipping). The price is for the 16GB WiFi/3G version and … 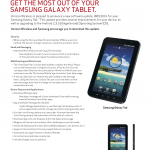 The Samsung Galaxy Tab attempted to do what no other tablet would: take on the iPad head-to-head. That first 7-inch offering didn’t topple Apple’s place atop the Tablet heap, but its release marked the beginning of the onslaught of Android tablets from all manufacturers that we see today. Samsung has since followed up that noble … 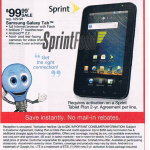 While this is far from everyone’s most wanted tablet, the Samsung Galaxy Tab could be a nice device for those who enjoy simplicity and who don’t want to spend half a paycheck on today’s monsters. If you’re one of those people, K-Mart has a great deal on Sprint’s Galaxy Tab – $99 after a two-year … 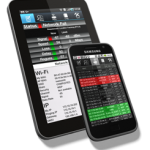 Samsung will soon begin production of a new 7-inch version of the Super AMOLED display, according to Korean site etnews. The high resolution display will sport 1024 x 768 pixels using the same technology behind the gorgeous screen found in several of Samsung’s smartphones. This 7-inch Super AMOLED display, however, has only one likely destination: …
See All