Samsung has announced a stunning upgrade to the original Galaxy S2 called the Galaxy S2 HD that features (you guessed it) an HD display. While immediate availability has only been announced for South Korea, international launches are expected. 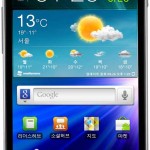