The Samsung Galaxy Player 4.0 was released along with its bigger brother, the Galaxy Player 5.0. It is made for those that want to have the benefits of a smartphone, but without having to commit to a phone plan. It is designed to be a form of mp3 or media player.

The device has everything one can expect from an Android smartphone, except the cellular radios. Specs include a 1 GHz processor, Android 2.3.5 and a 4-inch display. 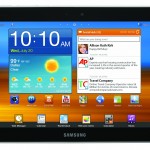 Samsung’s officially announced availability for their smaller Galaxy Tab 8.9 and their Samsung Galaxy Player devices clocking in at 4 inches and 5 inches. The Galaxy Tab 8.9 will be here October 2nd and comes in two flavors. The 16GB version can be yours for $470 while the 32GB will be available $570. Both come …
See All