The Samsung Galaxy 5 also known as the Samsung Corby i5500 Android (Corby is known as Genio in the Europe) was first spotted in official wireless certification documents before being teasingly seen 'in the flesh' behind a glass cabinet at the Google I/O conference with no information about the phone other than the fact it runs Android. Now ladies and gentleman the Samsung Galaxy 5 has been officially announced! I got some specs for you too including confirmation its packing Android 2.1 Eclair with a slightly customized UI (check the picture tab!), A capacitive 2.8" inch TFT-LCD screen supporting multi-touch, a 2 megapixel camera, 1200 mAh battery and all the wireless functions you'd expect including bluetooth, wifi, 3G etc. You can clearly see the sleek and attractive design just shouting at you to play with it! Exactly what you'd expect from Samsung.

No confirmed details as to price or Launch date but the interwebz point to a July release for about 199 Euros to Italian networks TIM and Wind. Keep an eye on this page and Phandroid.com for all the latest! 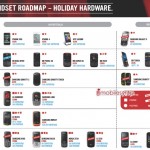 Virgin Mobile in Canada’s just let a huge one leak out. Most of the phones in this particular leak aren’t Android based – and the one that we can see isn’t one of Samsung’s prettier offerings – but it looks like Virgin will be getting the Samsung Galaxy 5. It was originally said that the …

Whether you’re seeking a high -end Android or a run of the mill Android, folks in India should be happy to hear they’ve got some new versions of each coming to their market.The HTC Desire, the company’s flagship phone of sorts, will launch in India for Rs 28,900 ($620) with Tata DoCoMo. While in some … Samsung news just keeps pouring out today. Now, we’ve learned Samsung’s shown official press treatment for both the Samsung Galaxy 3 (i5800) and the Samsung Galaxy 5 (i5500). Both phones are Android 2.1-based with Samsung’s own customizations sprinkled on top.The Galaxy 3 has a 3.2-inch capacitive touchscreen with a resolution of 320×240, a 3-megapixel camera, …
See All