The Epic 4G 2 is said to have a 1.2GHz single-core Hummingbird processor and an 8 megapixel camera, but everything else will remain largely the same, including that hardware QWERTY keyboard. 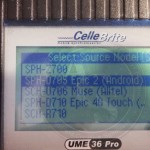 Right before we enter into the weekend, we get a juicy bit of news. Apparently, the Samsung SPH-D705 — otherwise known as the Epic 4G 2 — has popped up in the Cellebrite system indicating the device could be launching sometime in the very near future. Before you get mixed up, keep in mind we’re …

After the launch of HTC’s EVO 3D, a follow-up to by far Sprint’s most successful Android device, we imagined news about their Samsung-based products would start trickling in. First up, the Epic 4G 2. No, it’s not going to be a Galaxy S II with a keyboard, if This Is My Next’s rumor is to …
See All