The Motorola Slimline is one of two slim Android phones rumored to be in the works by the smartphone giant for a summer 2011 release. While there are no specs, a timeframe, or other information outside of its name, a leak from Motorola did reveal a picture of a sleek, slim unibody type device that has some people speculating. This could very well be the next flagship device from Motorola highlighting a design change for their smartphones. 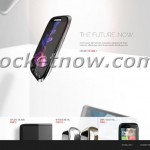 It’s not often we get too excited about site redesigns, but when they possibly reveal new devices we get a little giddy. PocketNow has gotten evidence of an imminent redesign of Motorola Mobility’s site. Said redesign looks to be launching alongside a few new devices that we haven’t heard of before.Firstly, there’s the Motorola XOOM …
See All