The Motorola Milestone 2 is the European Version of the Motorola Droid 2. The biggest differences are that this phone runs on a GSM network. It runs Android with MOTOBLUR, but so does the Motorola DROID 2 on Verizon.

Spec-wise it's all the same. 3.7 inch touchscreen, slide out keyboard, a 1GHz processor and 8 GB of onboard memory. Like most Motorola phones, the Milestone 2 has a locked and encrypted bootloader. It's more problemsome in Europe, though, as Motorola tends to be slow when updating their devices across the pond.

It’s been a long time coming, and quite frankly it’s rather sad how long it took for this to come, but the Motorola Milestone 2 has finally received its Gingerbread upgrade. European users of the device have been complaining to Motorola regarding the lack of updates and it seems this book can finally be closed. …

Those of you still rocking the Motorola Milestone 2 (DROID 2 for you Yanks), the folks who have just been acquired by Google has good news for you – Gingerbread is on its way! They’ve confirmed on their Facebook page that the phone will be receiving Android 2.3.Unfortunately, they didn’t give specifics as to when …

SIM-Free Motorola Milestone 2 Headed to the UK This Week, Subsidized for Vodafone

The Motorola Milestone 2 – everyone’s version of the Droid 2 outside of the US – is finally headed for retail shelves in the UK, this week, with Expansys being one of note to offer it for 380 pounds coming up. The phone will be SIM-free, of course, and ordering one will net you free … 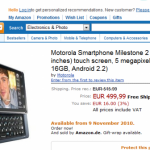 The Motorola Milestone 2, what will be the global version of the Motorola Droid 2 (but not the Droid 2 Global), hasn’t seen much action since a few leaks over the summer. Just when you might have thought hope was lost, the phone has made a quiet appearance at Amazon.de. For EUR 499.99 you can …

More Images of the Motorola Milestone 2 and Defy, Headed to Vodafone Germany

The Motorola Milestone 2 and Motorola Defy seem to speeding their way towards Vodafone Germany, as the company had both handsets on display at their booth at this year’s IFA. While no release date is known at this time, the presence of the devices suggests we could be seeing them on the carrier soon enough. …

Motorola Milestone 2 is Official, Promo Video Back Up

Yesterday we reported on a “leaked” promo video for the Motorola Milestone 2, but it was quickly pulled from Moto’s YouTube. Considering you can’t fight the tides of the internet, the video is back up and Motorola has gone official with the re-named Droid 2 for release in Europe. Being that it is simply the …

We were all waiting for it, even though it seemed like Motorola might not have any plans to release the Droid 2 outside of the United States. But thanks to an error on someone at Moto’s part, for but a brief moment an official promotional video for the Motorola Milestone 2 found its way to …

We’re not sure what Motorola would call these devices if they did end up getting European counterparts, but new rumors suggest that the Motorola Droid X and the yet-to-be-announced Motorola Droid 2 could be headed to Europe. French Android blog FrAndroid reports that the Droid X will be launched near the end of the year, …
See All