The Motorola FIRE is a phone first rumored by Clove UK and could be likened to a lower powered and European version of the Motoroal Droid Pro.  While it has a smaller screen (2.8-inches) and less powerful camera (3MP), the Fire also has a custom UI called MOTO SWITCH that has not previously been discussed.

The main show of the FIRE is it's portrait QWERTY keyboard- this phone is a low-to-mid range Android phone that packs the Blackberry-ish keyboard experience without other specs some consumers may find more than tney require. The device is powered by a 600MHz processor, 256MB RAM, 512MB ROM, and runs Android 2.3. 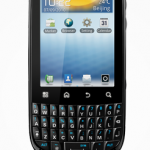 Just got a heads-up from the lads at Clove.co.uk about a forthcoming Motorola phone. It’ll be called the Motorola FIRE, and at first glance it essentially looks like Europe’s version of the Motorola DROID Pro or Motorola Titanium, although this one is positioned for the mid-range market judging from preliminary specifications.It has an exposed portrait …
See All