Motorola has announced its first ever Android Phone called the Motorola CLIQ, soon headed to T-Mobile USA! Running their custom build of Android called Motorola BLUR, the CLIQ aims to consolidate your entire social experience into one, integrated and easy to use experience.

The CLIQ is the 2nd Android Phone with a FULL QWERTY keyboard and by FAR the sexier of the two (the G1 being the other). The hardware enjoys modest improvements over the other two American Android phones - the G1 and MyTouch 3G - but the culmination of these small improves amount to big gain for consumers.

Featuring a 3.5mm headset jack, 5MP camera, and video capture at 25/fps and 2560 x 1920 resolution the Motorola CLIQ is a step up in terms of multimedia capabilities. The handset also includes an FM radio that is hidden but can be activated by a hack which you can find in a simple Google search. The other specs are on par with a 528MHz Qualcomm processor, 256MB RAM, 512MB ROM and 32GB MicroSD Capacity.

But perhaps the biggest asset of the Motorola CLIQ is the embedded software - Motorola BLUR. This is the Moto customized version of Android that not only improves the stock Android User Interface by leaps and bounds, but also adds a new level of functionality previously not capable.

The Motorola CLIQ was Originally thought to be a mid-range texting device targeted towards teenagers, Motorola and T-Mobile upped the Ante by announcing a super sleek and sexy Android Phone that meets and beats expectations.

Sorry Motorola Cliq XT, No Android 2.1 for You

In a move that doesn’t surprise us all given the state of Android OS upgrades these days, Motorola has decided to cease development on Android 2.1 for the Motorola Cliq XT. The lower-range handset will, instead, remain on good ol’ Android 1.5. I will give Cliq XT owners a minute to scream into a pillow.All …

We originally heard it’d be here mid-November, and Motorola started seeking out testers late October for the update, but Motorola CLIQ users all across the country can now download the upgrade to Android 2.1 for their smartphones. You need to do it manually, however, so make sure you go to Motorola’s site to download the … 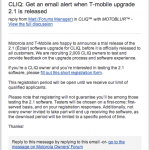 Motorola and T-Mobile are looking for 2,000 CLIQ owners to beta test the much-anticipated Android 2.1 (Eclair) release for the handset. This should come as a relief to many owners clamoring for the update, and goes right along with reports that the final release will take place right around mid-November. If you want a chance … 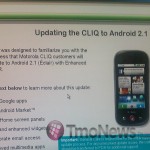 Yes, you’ve heard this one before, but bear with me: new evidence suggests T-Mobile will be pushing out the upgrade to Android 2.1 for Motorola CLIQ users soon. It’s been a long time coming, and – by now – everyone’s more concerned about Froyo than they are Eclair, but those faithful CLIQ owners with T-Mobile …

It’s always a sad day when I have to report about the eventual kicking of the bucket for any Android handset. Today, TmoNews’ source says that three of T-Mobile’s Android phones will be hitting end-of-life on October 4th. The MyTouch 1.2 (the one with the 3.5mm headphone jack, more memory, etc.), the Motorola CLIQ, and …

[Update] Motorola Cliq’s 2.1 Update Has Been Leaked – Come an’ Get It!

[Update]: Well that sucks: the file’s already unavailable for download. I guess some of you might have to take a look into the original forum post at ModMyMobile to see if the file’s been mirrored.[Update 2]: Mirror Mirror on the Wall!Motorola Cliq users (that are savvy enough to put this information to good use) are …

They May Have Missed Q2, but Motorola Has Updated Their Android 2.1 Timeline: Cliq and Cliq XT “testing in process”

Either Motorola is really close to getting the anticipated Android 2.1 update out to the CLIQ and CLIQ XT, or they have just given up on naming a timeframe to avoid the metaphorical tomatoes and other assorted fruits and vegetables owners of those devices have been stockpiling to fling in their direction come the end …
See All