With a name like CLIQ XT, one would think this phone would be a larger or more heavily powered version of Motorola's first ever Android - the Motorola CLIQ. But in reality the Motorola CLIQ XT is a different beast entirely, ditching the slideout QWERTY keyboard in favor of a taller, wider, and MUCH slimmer package.

In fact, with a name like XT it's a bit surprising that its slim (.44 inches thick) and lightweight (4.4 ounces) are two of its best traits. The CLIQ XT comes with a 3.1-inch screen, touch sensitive directional pad, 5MP camera with LED Flash, Wi-Fi, Bluetooth and overall is a solid but not overly impressive device.

The CLIQ XT does come with some added bonuses such as Swype - an onscreen software keyboard that makes typing on the smallish 3.1-inch screen a bit less tedious - and also includes Flash Lite 8.1 and multi-touch support. This comes along with Motorola's custom Android UI - Blur.

Strangely, the CLIQ XT excels for being small and struggles for the same reasons. It is a more than capable device and offers a nice balance for beginning smartphone users, but the high-gear smartphone users will be disappointed by its small display and mediocre processing power. 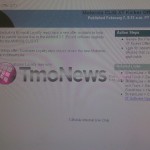 Here is something interesting: T-Mobile is providing a special offer through their Customer Loyalty reps in order to prevent the loss of subscribers ticked off by Motorola’s abandoning of Android 2.1 for the CLIQ XT. The leaked document obtained by TMoNews calls the offer confidential and doesn’t provide any details on what it might be.Our … 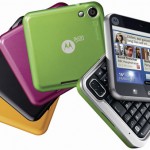 Hate to be all bad news bears this morning, but the Cliq XT won’t be the only device from Motorola’s lineup not receiving an Android update. Their Android Software Upgrade list has been updated accordingly. I suppose the good news is that the Motorola Flipout, Charm, and i1 will be stuck at Android 2.1 as …

Sorry Motorola Cliq XT, No Android 2.1 for You

In a move that doesn’t surprise us all given the state of Android OS upgrades these days, Motorola has decided to cease development on Android 2.1 for the Motorola Cliq XT. The lower-range handset will, instead, remain on good ol’ Android 1.5. I will give Cliq XT owners a minute to scream into a pillow.All …

Maintenance Update Rolling Out for Motorola Cliq XT on T-Mobile

A maintenance update is currently rolling out for the Motorola Cliq XT. It goes without saying that this ISN’T a move up to Android 2.1, but rather a series of bug fixes and enhancements to help improve stability and overall phone performance and speed. Also eliminated are bugs for erroneous notifications that a message has …

It’s always a sad day when I have to report about the eventual kicking of the bucket for any Android handset. Today, TmoNews’ source says that three of T-Mobile’s Android phones will be hitting end-of-life on October 4th. The MyTouch 1.2 (the one with the 3.5mm headphone jack, more memory, etc.), the Motorola CLIQ, and …

T-Mobile is searching for 1000 guinea pigs upon which to unleash an in-testing update for the Motorola Cliq XT. The new update is in no way, shape, or form Android 2.1, but it promises to fix a handful of bugs and add some improvements to the Cliq XT experience. Users can expect better overall phone …

They May Have Missed Q2, but Motorola Has Updated Their Android 2.1 Timeline: Cliq and Cliq XT “testing in process”

Either Motorola is really close to getting the anticipated Android 2.1 update out to the CLIQ and CLIQ XT, or they have just given up on naming a timeframe to avoid the metaphorical tomatoes and other assorted fruits and vegetables owners of those devices have been stockpiling to fling in their direction come the end …

Over the weekend, it appears that Motorola has updated their chart outlining upgrades for several of their Android-based phones. Most phones are still only planned to be receiving Android 2.1 (Motorola Droid’s rollout has finished, while the Milestone is still currently being rolled out in stages for other international markets).For the Motorola Backflip, they’re targeting …
See All