The Motorola Backflip launched as the first ever Android phone on AT&T, making it the last major American carrier to offer a phone based on Google's operating system. The Motorola Backflip certainly arrives in style and flair, offering a never-seen-before form factor that you'll probably either love or hate: The main attraction of the Backflip is exactly what its name describes: the keyboard is fully exposed on the back of the phone at all times, and when flipped open, reveals a touch sensitive keyboard on the rear of the phone in ADDITION to the QWERTY that faces you.

Other highlights of the phone include a 3.1-inch HVGA screen, 5MP camera with LED flash and in terms of software, Motorola's custom build of Android focused on social networking - MOTOBLUR.

How To Install 3rd Party Apps On The Motorola Backflip

The Motorola Backflip has its lovers and has its haters – but lets put this particularly unique piece of hardware aside. A good portion of the phone’s criticism has come because of AT&T’s insistence on locking down Android. Not only do they bloat up you phone with ATTware, prevent you from removing/deleteing said bloat, but …

It looks like two rather lackluster Android handsets are meeting their demise on AT&T in the coming months. The Motorols Backflip will reach end-of-life on February 2nd, while the Sony Ericsson Xperia X10 will do the same come March 6th. Both phones fell short of anything spectacular, so it is questionable how much they will …

[Update]: Disregard everything I’ve said below. You can not get this update over the air, but Android 2.1 is still available. (Sorry for the confusion, guys. I don’t keep up with the version numbers for this phone.) Thankfully, you guys are quick to spot our inaccuracies and one of you have tipped us with an … 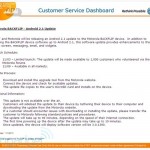 It wasn’t long ago that we told you that Motorola was looking for test users for the Android 2.1 update AT&T’s Backflip, but it is kicking off today. One thousand of those who applied to get the update early will receive it starting today, and provided all goes well all users should be start seeing …

Backflip owners, you’re finally right on the heels of the  promised upgrade to Android 2.1 for your devices. Just as they’ve done with devices before it, Motorola’s looking for testers to try out the upgrade before they send it out en masse. We’re not sure where a Backflip owner might have had to sign up …

Sharing is caring, or so says Motorola’s catalog of Android smartphones. After we learned that the Droid X’s and Droid 2’s root methods were one in the same, some other nifty hackers owning the Motorola BACKFLIP confirmed the exact exploit and method worked for their AT&T-branded device. Now I’m wondering if all of Motorola’s phones …

Telus is getting ready to roll out another OTA upgrade (which still isn’t Android 2.1, unfortunately) for their Motorola BACKFLIP and they’re looking for 200 participants to help test the upgrade and provide feedback on the process and changes. It’s going to be a game of chance as they’re offering it OTA until they’ve reached …

More and more Android smartphones are heading to or being announced for the Indian market. Today comes word that the Motorola Milestone XT720 and Motorola BackFlip will both be available, though both will see some steep pricing. The BackFlip is naturally the lower priced of the two, coming in at 22,990 INR (about $499) for …

Sometimes you just need to take what you can get, and in this case Motorola Backflip owners should at least be happy their phone is receiving some sort of update. Motorola has released a two-part OTA maintenance update for the Backflip that promises to bring certain enhancements and bug fixes to the handset.Among bug fixes …
See All