The LG DoublePlay is a T-Mobile device that has dual-screens - a primary 3.5 inch display and a smaller one sitting beneath that. The display is revealed by sliding the top portion of the device up. On each side of the secondary display are keys to make up a split hardware QWERTY keyboard. The device also has a 5 megapixel 720p HD camera with flash. Unfortunately for software, we're only getting Android 2.2 with LG's UI.

Early press shots suggested the display would be used for launching apps when inside another but T-Mobile has described it as having more functionality than that, saying you'd be able to keep up with your social life without having to leave a game, a website or any other application.

Some devices survive a mobile lifetime without hitting end of life while others are decommissioned faster than the season in which they launched is over. It looks like T-Mobile will soon be putting several of their devices on end-of-life, many of them being Android-based handsets. Highlights include the HTC Sensation 4G, the HTC Amaze 4G.We’ve … 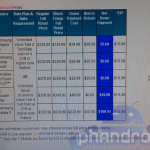 We’ve just gotten word from our trusty T-Mobile inside about some deals related to Black Friday and the holiday season. Firstly, they’re offering discounts on down payments for off-contract device purchases.The Samsung Exhibit II 4G, the MyTouch by LG (excluding the Q) and the Samsung Gravity Smart all have no down payments so you can … 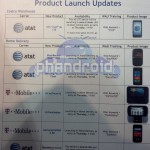 Costco to Get HTC Vivid Nov. 10 According to Leaked Road Map

The HTC Vivid is set to be one of the first 4G LTE smartphones on AT&T, and it will be available for purchase November 6th direct from the carrier. If you prefer to get your handsets through Costco, however, you will have to wait a few days. The earliest and stores will stock the new … 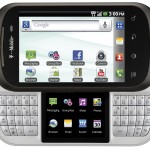 LG DoublePlay Should Be Available in T-Mobile Stores Today`

If you were waiting to see an in-store demo of this phone yourself, the LG DoublePlay is expected to land in T-Mobile’s magenta-laced stores today. It’s a dual display device which sees its secondary display sitting between keys on the slideout QWERTY keyboard.The display is advertised to be used for keeping in touch with your … 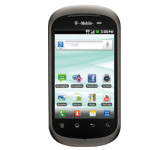 The LG DoublePlay has been made available on T-Mobile’s website today. You can walk away with this unique looking device for $100 on a new two-year agreement ($400 otherwise).If you can’t already tell from the blatantly obvious photo of the device above, the LG DoublePlay boasts dual displays, one a 3.5 inch primary display and … 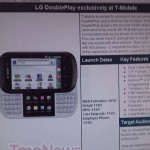 The LG DoublePlay became official back on October 17th and while LG provided some basic details on the device, a launch date was never given. Today, a leak from TMoNews has pegged the device for a November 2nd release with the web and telesales offering the device a few days early on Wednesday.The LG DoublePlay …

With the market for a dual-touchscreen phone with a QWERTY keyboard lacking, LG has announced the bizarre experiment known as the LG DoublePlay. Calling the phone the “ultimate multitasking handset,” the DoublePlay features a clamshell design withsplit QWERTY keyboard. a secondary touchscreen 2.0-inch display comes nestled between the two halves. The main display measures in … 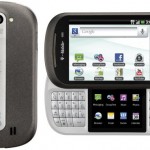 A while back, a photo of an LG device with a secondary device popped up. It was unique, revealing a separated keyboard with a small display beneath the top sliding portion of the phone. PocketNow has received official press shots of the device, though, and it revealed its name – the DoublePlay.The display beneath the …
See All