The hardware of the HTC Wildfire isn't exactly 'jaw dropping,' but still great for an 'entry-level' handset for folks on a budget. Specs include a 5 MP camera with geo-tagging & auto-focus, 3.2" inch capacitive that supports multi-touch and gesture input and packed with Android 2.1 Eclair definitely showing the Wildfire is the successor to HTC's other budget phone - the Tattoo.

A fun fact about this phone is the name -- HTC ran an online poll to decide what the handset should be called and "Wildfire" came out on top. The name ends up all too fitting.

The HTC Wildfire features HTC's typically fresh stylings, which include an optical trackpad for navigation. It has since seen its successor in the HTC Wildfire S. 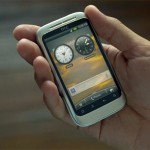