The HTC Merge is Verizon, Alltel, and US Cellular's version of the Desire Z, but it's been a bumpy ride from rumored to store shelves. It was finally available via smaller carriers as early as May 2011 after HTC officially announced its existence. The biggest carrier to adopt it, Verizon, finally decided to officially carry it, but didn't advertise it or have it on store shelves.

Instead, they left it up to third party retailers, namely Best Buy, to offer the device on Verizon's network if the customer wanted it. Many are saying the Merge was too little, too late up against a new wave of powerful smartphones, but the Merge is still a decent buy if you need a solid phone with a QWERTY keyboard. Other specs include a 3.7 inch TFT-LCD display, HTC Sense, an 800Mhz processor, a 5 megapixel camera with HD video recording, 512 MB and more. 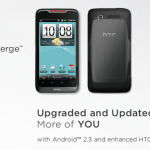 Gingerbread is all over the place lately, it seems. US Cellular has delivered the upgrade to owners of the oft-forgotten HTC Merge. Unfortunately it does appear you may need a Windows PC to apply this yourself as it requires HTC Sync, but be sure to call your local US Cellular location to see if they … 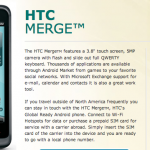 US Cellular’s HTC Merge Officially Coming May 31st for $150

This thing’s heading to even more regional carriers. The HTC Merge – which has had a bumpy ride on its way to store shelves since we first heard of it – is finally headed to US Cellular on May 31st. It’s easy to liken this phone to The T-Mobile G2, except with HTC Sense on … 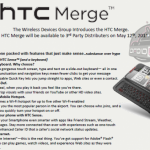 The HTC Merge has been one interesting phone. No, not because anything with the hardware or software is unique. But because it has been in the works for the longest and Verizon seemingly wants nothing to do with it. After countless leaks telling of its existence, HTC officially announced the thing but Verizon had no … 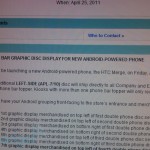 I first heard about the HTC Merge last fall when someone leaked some pics of the phone on Verizon’s network. Since then, you can find the Merge on just about every carrier these days. Alltell wireless is taking pre-orders and Cellular South plans to release it soon. Don’t even get me started on Verizon, who … 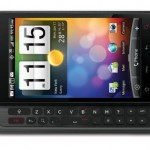 HTC promised that the Merge would be headed to “multiple carriers” this Spring, and according to this leak they seem to be telling the truth. US Cellular is said to be the latest carrier to gear up for its launch and it could be happening as early as April 29th. We’ve reached out for comment …

As is usual with devices set to launch on Verizon’s network, entries have appeared in their Device Manager for Big Red’s upcoming Android lineup. Nothing startling or all that new is revealed, but the Motorola Droid Bionic, Samsung Droid Charge, HTC Droid Incredible 2, and Motorola Droid X2 all appear as well as the LG … 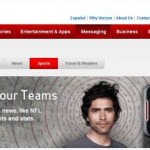 HTC Merge Makes Appearance on Verizon Site, Will it Ever Get a Release?

Alltel’s just issued a press release reminding everyone that their Android line-up isn’t too shabby. Highlights include the HTC Merge and the Motorola Milestone, but there are some other gems alongside those which include the Samsung Gem (yes, I tried to do that – shame on me) and the LG Axis. You should already know … 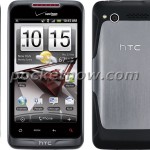 I totally did not mean to do that with the title. Anywho, PocketNow has gotten their paws on new official press shots of Verizon’s HTC Merge. It’s not as if we haven’t seen this phone a billion times before, but these seem like crisp and clear shots – earlier press shots weren’t as clear and …

HTC Merge Gets Its Own VZ Navigator in Android Market, Could Finally Be Nearing Verizon Release

We still aren’t sure if Verizon will ever see the HTC Merge, but the appearance of a VZ Navigator for Merge in the Android Market suggests the time may be nearing. The device has already been officially announced for Alltel and Cellular South, but once again seems lost to Verizon’s lineup of upcoming high-end Android …
See All